Msc. Karolina Spustova at the Department of Chemistry, Faculty of Mathematics and Natural Sciences, is defending the thesis «Membranous Protocell Superstructures» for the degree of Philosophiae Doctor. 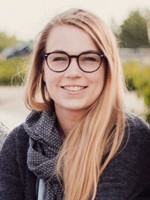 "Membrane-less compartments and the emergence of life"

How primitive cells emerged and developed on the early Earth remain an unsolved question. In contrast to the hypotheses that the first living cells evolved from a single ancestor, their development as colonies would provide numerous advantages, such as mechanical stability, enhancement of chemical reactions, and sharing of prebiotic molecules.

In this PhD thesis, the formation and development of colony-like primitive cell structures and populations was investigated using three simple ingredients: water, fat molecules and solid surfaces. Transformation of fat agglomerates into large populations of structured primitive cells that are able to communicate and migrate, was observed under a light microscope. The role of solid surfaces which were abundant on the early Earth in form of rocks and minerals, was shown to be fundamental for these processes.

These findings make us rethink the current theories on how life originated and show that solid surfaces might have played an important role in the emergence of primitive cells on the early Earth.