The chemistry behind CHAIN

Although CHAIN can be played without knowing that is has anything to do with chemistry, once you enter a chemistry class (we realize some unfortunate people never do) you will find that many of the principles governing naming and classification of organic molecules are already known to you. In fact, CHAIN has been designed for exactly this purpose. 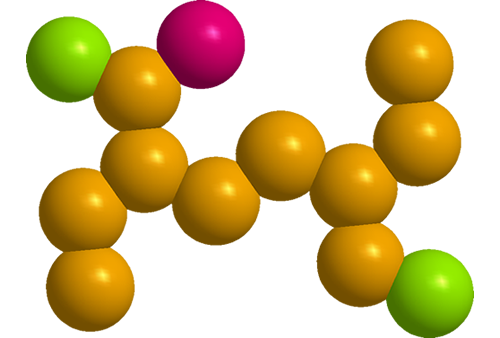 Here you will find a short description (in writing) of the basic organic chemistry you will pick up by playing CHAIN (while at the same time having fun!). There are three different modes, EASY, MEDIUM and HARD. It should be no surprise that HARD is the most difficult one, so we suggest that you begin with EASY and go for tougher challenges once you are pleased with you own skills.

In EASY you will get introduced to different ways of illustrating molecules, which may at first seem a bit confusing. Next you will learn how to find the longest CHAIN of atoms in a single molecule that may be very simple, without branching, or have a series of branches.

In MEDIUM you will encounter heteroatoms, i.e. atoms other than carbon (C) (and hydrogen, which we don’t care so much about), that you will find in what we call functional groups, and learn how their presence affects the way you count the number of C-atoms in the longest CHAIN. Some molecules will even contain two or three heteroatoms of the same or different types (appearing in CHAIN in different colors).

In HARD molecules will tend to contain two or more heteroatoms, and sometimes it will not be possible to find a way to draw a CHAIN that will touch all of these. In such situations you need to make choices based on the priorities of the functional groups.

CHAIN is all about counting (quickly!) the number of carbon atoms in an organic molecule. In EASY all molecules are composed entirely of carbon (C) and hydrogen (H), they are hydrocarbons. Moreover, we will not deal with double bonds and triple bonds (for those who are familiar with that kind of stuff), meaning that we consider only the simplest type of hydrocarbons called alkanes.

The two first alkanes (in an infinite series) are methane and ethane with just one or two C-atoms. You will never see them in CHAIN; the shortest you will find is propane with three C atoms. The chemical formula for propane is C3H8, so there is a lot of hydrogen involved.

As chemists get tired of drawing all these H-atoms, they often don’t bother to do so (middle). Carbon atoms are traditionally drawn in dark grey or black in chemistry textbooks, which is a bit dull, so we will use orange instead in CHAIN, as shown to the right.

The way of drawing molecules above, called ball-and-stick representations, is pleasing in that it makes it easy to identify the atoms and the bonds between them. It does not have any physical meaning, however, as molecules are actually much larger. Furthermore, showing bonds as thin lines (or sticks) conceals the true nature of the chemical bond.

A space-fill model (to the left) gives a more reasonable impression of molecular size, but makes it hard to see what atoms are actually bonded, particularly for large molecules, as the bonds themselves are invisible. The stick (middle) representation is the simplest and fastest way to draw a molecule and shows only the bonds. In EASY we also use a fourth representation (right) that we might call pearl. This is not a common way to depict molecules, but makes CHAINs easy to recognize.

Putting together four carbon atoms, you will find that it can be done in two different ways: either as a straight CHAIN of four atoms or as a T-shaped molecule.

The first is called butane, and in CHAIN belongs in the 4-box, while the second, an isomer called isobutane, has only three atoms in its longest chain and thus belongs in the 3-box together with propane (its formal name is methylpropane, but we will not deal with names in CHAIN). This is an example of a molecule with branching.

In molecules with many branches finding the longest CHAIN may be tricky. Our eyes will tend to focus on horizontal chains, but other chains may be longer. Be aware!

Atoms other than C (and H, which we do not show) are introduced in CHAIN through the use of colors. These go as follow:

Some familiar molecules are:

Note the combination of hydroxyl and carbonyl in a carboxylic acid group, which is considered a functional group on its own.

Above, the longest chain has eight C-atoms, but the molecule nevertheless goes in the 5-box as the longest chain containing the red and green atoms is only five C-atoms long. Take note of the word “containing”. You always count only C-atoms, heteroatoms are never included.

Although most of the molecules used in the HARD mode are familiar from EASY and MEDIUM, there will be some new ones that should really have you thinking: it is sometimes not possible to draw a chain that will catch all colored atoms! This means that you have to leave one or more out. How do you choose which one(s)? The answer is that you need to know something about priorities; some groups are simply higher in rank than others. In CHAIN you only need to keep track of three groups (listed by decreasing priority): 1. green + pink, 2. green and 3. pink (or in chemistry language: 1. carboxyl group, 2. carbonyl group and 3. hydroxyl group). Consider the two examples below how this works for the way you count C-atoms in a CHAIN.