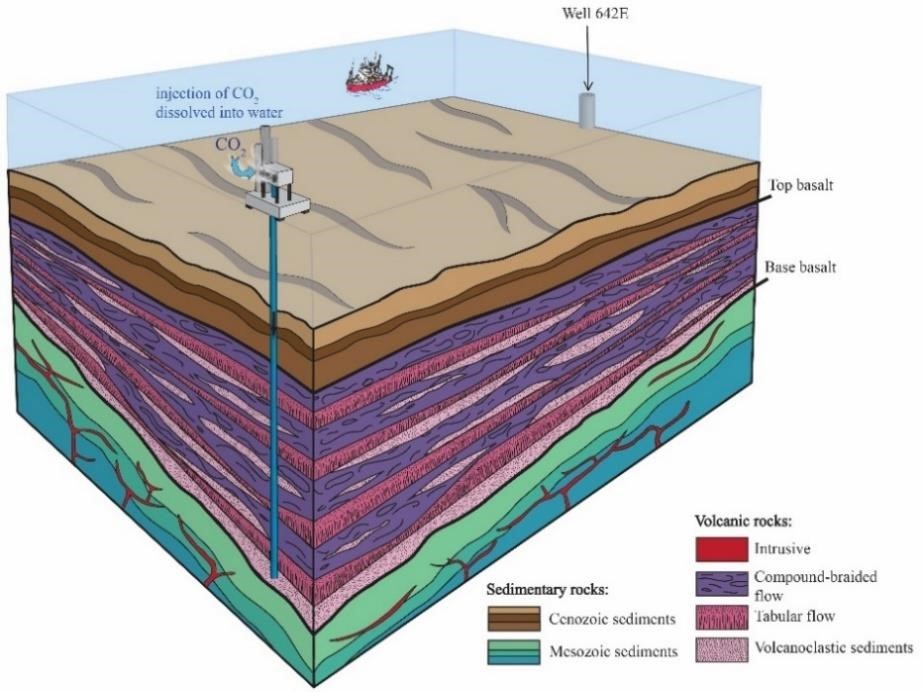 Sketch showing carbon dioxide being injected into a basalt reservoir off-shore Norway. The basalt sequence (pink, purple) is overlain by clay sediments (brown) and underlain by clastic sediments (green) that have been intruded by sills and dykes (red). Borehole 642E, drilled as part of the Ocean Drilling Program, is indicated. In the Faroe Islands, similar basaltic sequences outcrop at the surface allowing us to study them in great detail. Illustration: Marija P. Rosenqvist (from Planke et al., 2021).

In October 2021, The Faculty of Mathematics and Natural Sciences announced a call for sustainability projects at UiO. CO2Basalt was selected to get three of the 23 assigned early career positions. In 2022, we will enrol two PhD students and one post-doctorate fellow at the Njord Centre, who will work jointly on developing a better understanding of reactive fluid flow across scales in basalts.

Storing carbon in basalt comes with many benefits. The CO2 will quickly react with the divalent cations (Ca2+, Mg2+, and Fe2+) from dissolving minerals in the basalt and form carbonate minerals. In comparison, it might take several thousand years for significant amounts of CO2 to mineralize in a sandstone reservoir. Once mineralized, the carbon will be immobilized over geological timescales. Storing carbon in basalt also provides large reservoir volumes worldwide. Estimates suggest that mid-ocean ridges worldwide can store up to 100,000 Gt of CO2. This is more than 2000 times the annual global emissions of CO2, and the possibilities of carbon storage in volcanic sequences are therefore important to study further. The main goal of CO2Basalt is to evaluate the hypothesis that the multiscale flow pathways in basalts can host voluminous flows of carbon dioxide mixed with water that will react with the host rock to produce carbonate minerals.

CO2Basalt will be led by Professor François Renard and will involve an interdisciplinary group of researchers in geosciences, physics, and computational science. The project involves 1) physicists and geologists of the Njord Centre at the University of Oslo; 2) the company Volcanic Basin Petroleum Research AS (VBPR), which will provide seismic data and scientific and industry cores and borehole data from the Norwegian Sea; 3) the Norwegian national infrastructure “Goldschmidt Laboratory”, hosted by UiO, which will provide microscale porosity characterization with electron microscopy; and 4) the European Synchrotron Radiation Facility (ESRF) where we will perform dynamic microtomography experiments.