Studying gas samples from active hydrocarbon fields could be considered a routine task, however, throw an nearby active volcanic arc into this mix and you’ll be in for a few surprises. A new LUSI Lab CEED-INGV collaborative study published in JGR: Solid Earth, reveals that hydrocarbon reservoirs in NE Java, Indonesia, are connected through a system of faults to the neighbouring Arjuno-Welirang volcanic complex. The work, led by CEED PhD student Alexandra Zaputlyaeva, used geochemical measurements of gases and subsurface geophysics to trace out the migration pathways. 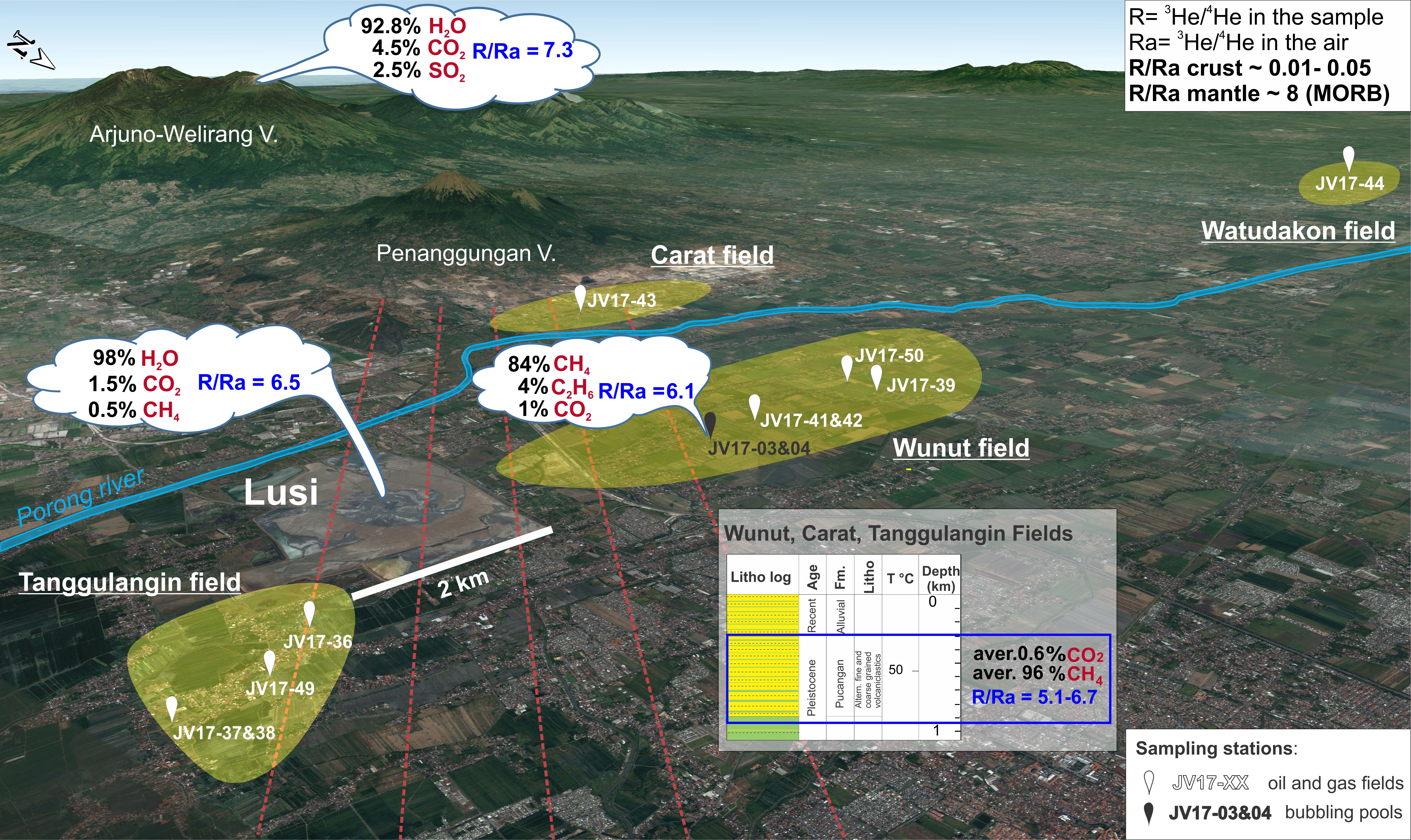 Hydrocarbon fields in the southern part of the East Java basin are of high interest due to their vicinity to the active volcanic complex (Arjuno-Welirang) and Lusi mud eruption. Much to the surprise of locals and scientists alike, Lusi started erupting in May 2006 and has continuously erupted boiling water, mud breccia, gas and oil since then. The devastating nature and unstoppable character of the system led to the presence of a huge mud pool covering ~7 km2 area and forced ~ 60,000 local residents to relocate. The activity of the Lusi system was recently shown to be driven by the migration of the magmatic and hydrothermal fluids at ~4 km depth from the neighbouring volcanic complex (Fallahi et al., 2017; Inguaggiato et al., 2018; Mazzini et al., 2012).

The latest study, which involved CEED’s Alexandra Zaputlyaeva and Adriano Mazzini along with INGV (Italy) researchers Antonio Caracausi and Alessandra Sciarra, suggests that the Lusi system and neighbouring oil and gas fields (3-7 km away from the eruption site) are mostly compartmentalized. They base this on the fact they possess quite different molecular and isotopic gas composition of hydrocarbon gases (СH4, C2H6, C3H8) and carbon dioxide (CO2). This implies that the gas venting at the Lusi is not sourced by the producing shallow (200-1000 m depth) hydrocarbon reservoirs.

Instead, the helium isotopic composition of the gases at the Lusi and hydrocarbon fields (up to 6.7 RA, where R = 3He/4He of the sample, RA = 3He/4He of air, 1.4 × 10−6) reflects measurements from the fumaroles of the nearest active volcano (7.3 RA at Arjuno-Welirang, (Inguaggiato et al., 2018)), suggesting the migration of mantle-derived volatiles toward sedimentary basin. Deep seismic profiles across the hydrocarbon fields and Lusi system help to trace the migration pathways of deep-rooted volatiles through the fault system. Combining all available geological, geochemical and geophysical data, the authors propose a new scenario of the basin fluid migration in the southern part of the East Java Basin.

The study outlines that monitoring the noble gas composition in the hydrocarbon fields neighbouring active volcanic complexes could represent an efficient and logistically simple tool to characterize the perturbations of adjacent magmatic complexes and can be applied in other regions of the world.

By Alexandra Zaputlyaeva and Grace Shephard
E-mail this page
Siste innlegg More ...
UiO > The Faculty of Mathematics and Natural Sciences >
The Centre for Earth Evolution and Dynamics > About the centre >