The goal of the research cruise, which started on October 19th, is to learn more about the interactions of climate and tectonic process, and their effects on biosphere during the last million years. A multidisciplinary team of geologists, oceanographers, biologists and geophysicists are gathered onboard new Norwegian ice-going research vessel R/V Kronprins Håkon which steamed to the Fram Strait, the gateway between the Arctic and North Atlantic ocean. Onboard is a new piece of technology that enables the scientists to reveal the complete sedimentary record in very high resolution - a giant piston-coring tool, named after mythological goddess Calypso. My aim for this cruise is to gain more information by integrating the deep Calypso coring with in situ temperature measurements in the sediments and water column.

[Update] A report from the cruise can be found at the link here. The new ice class research vessel Kronprins Haakon is equipped by state of the art geological and geophysical facilities. Here it was ready to depart from the port of Longyearbyen, Svalbard.  On photo: Simone Sauer (IFremer, France), on the left, is talking to Martin Klug (NGU, Norway). Photo by Sasha Minakov. We are steaming to the unknown! A thick ice does not make any trouble. Perhaps, apart of a roaring noise :). Photo by Sasha Minakov.

The pattern of winds and currents control the distribution of marine ice in the polar north Atlantic. The ice cover increases towards the coast of Greenland due to the counterclockwise turn of the warm West Spitsbergen current (northernmost branch of Gulf Stream) and the cold Transpolar – East Greenland current. The study region is located in a narrow passage between the Svalbard and Greenland shelves, which was formed by seafloor spreading at the Knipovich Ridge during the last 10 million years. Today's active plate boundary in this area (i.e. between the Eurasian and North American lithospheric plates) is dominated by transform motion when the plates slide relative each other in tight contact, producing a complex tectonic environment. Most of the sampling localities are located along the Svalbard passive margin, a place of enormously high sedimentation rates due to glacial erosion processes (on average, a meter of sediments over 2000 years!). The sedimentary processes, ocean circulation, and geothermal heat are intimately linked to the evolution of ecosystems and biodiversity in this region. For example, the primary source, accumulation and release of methane is currently one of the main topics of the multidisciplinary Earth system research. 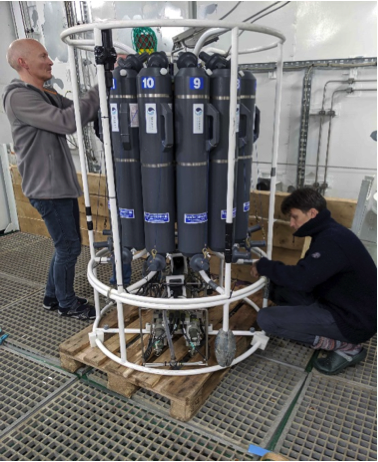 Ocean electrical conductivity, temperature, and salinity are routinely measured using CTD probes which are lowered into the ocean. This information is essential for ocean circulation modelling and acoustic profiling. On the photo (left): Roy Robertsen (Institute for Marine Research, Bergen) and Sasha Minakov (CEED) mount additional geothermal sensors to reconstruct a continuous temperature profile (right) across the sediment-water interface at the seafloor. Photo by Simone Sauer. 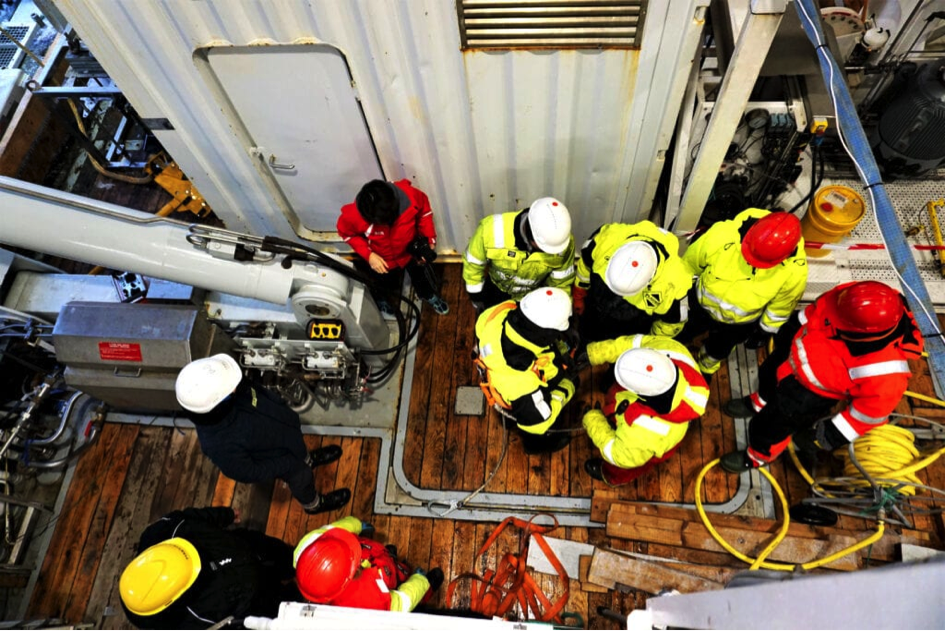 The crew and scientific staff are excited in preparation of the first deployment of the giant piston corer. Photo by Mariana da Silveira Ramos Esteves.

The unique Calypso corer system allows for deep sampling of marine sediments (up to about 50 m - most corers are only meters to just over 10 meters in length). A long iron lance with a several tonnes weight located on top of it is lowered close to seafloor using a powerful winch controlled by precise electronics. A mechanical trigger enables a free fall right of the lance and deep penetration across the sea bottom. The piston inside the barrel and core catcher allow for the retrieval of undisturbed sediment core, accommodated within a plastic liner inside the steel lance. A special mechanical and hydraulic system for deep piston coring operations was designed for the Kronprins Haakon icebreaker. On the photo: Stig Monsen (UiB) make final preparation to launch the Calypso corer. The magnetic orientation sensor (grey box) attached to the red orange weight on top of the core barrel allows to obtain spatial orientation of the core relative to the vector of the geomagnetic field at the sampling location. This information is important for the following up geomechanical analysis of the core material aiming to constrain orientation of tectonic stresses in the lithosphere. Photo by Sasha Minakov. Temperature sensors are mounted on the core barrel. Photo by Jochen Knies. The sensors are housed by steel holders (fins), within about 10 cm distance of. This helps to reduce the effect of frictional heating in the vicinity of barrel and minimize the time required to perform measurements of steady-state in situ temperatures in the marine sediments. The heavy and strong iron lance in most circumstances can easily penetrate shallow marine sediments which is a loosely consolidated mud. More than a half of this is water and the rest is clay minerals. However, there is always a chance of encountering erratic crystalline rocks or drop stones transported by glaciers. Each site is carefully studied using acoustic sounding and shallow coring before the deployment of the long piston corer. Moreover, the combination of shallow and deep coring provides complementary data with a better depth resolution. The combination of the temperature measurements (the inset to the right) from the 6 m long gravity corer and 17 m Calypso corer helps to obtain a more robust measurement of geothermal gradient at the Svyatogor seamount at eastern flank of the Knipovich Ridge.

The cruise will be completed in Longyearbyen on the 9th of November. More about the status of the cruise, science behind and social life onboard can be learned at the website of Centre for Arctic Gas Hydrate, Environment and Climate https://cage.uit.no/category/cruise-blog/calypso-coring-in-the-fram-strait-19-3/

By Sasha Minakov
E-mail this page
Siste innlegg More ...
UiO > The Faculty of Mathematics and Natural Sciences >
The Centre for Earth Evolution and Dynamics > About the centre >