Fossil fuels are typically generated within buried organic-rich sediments over long geological timescales. However, these processes may be accelerated when the sediments are exposed to migrating magmatic fluids, such as those related to nearby volcanic activity. A new international collaborative study in Scientific Reports led by CEED PhD student Alexandra Zaputlyaeva including CEED researchers Adriano Mazzini and Morgan Jones, investigates the ongoing reactions below the largest active mud eruption on Earth – Lusi - located in north-east Java (Indonesia). Results reveal that hydrocarbon generation is occurring ~4.5 km below Lusi and that this is largely driven by the recent magmatism. 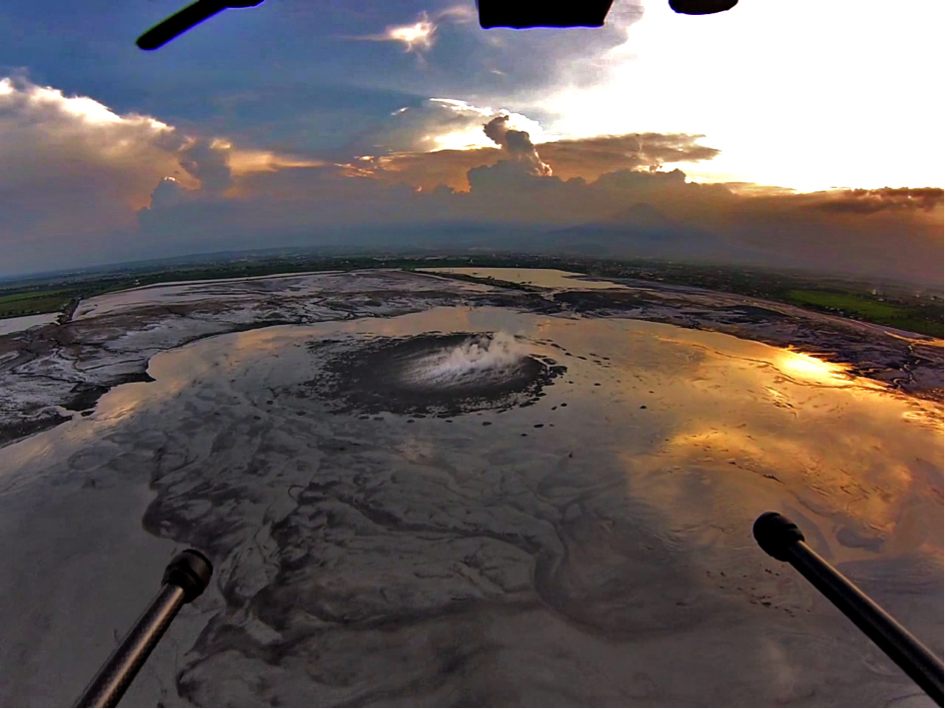 Photo: Drone photo of the southern part of the Lusi crater, showing floating oil films (black) on the surface. Note the related, larger volcanic complex on the background.

It is well established that magmatism can trigger/enhance hydrocarbon generation within organic-rich deposits in sedimentary basins. However, the complexity of the processes are yet to be detailed in modern settings. The Lusi eruption, located in the East Java petroleum basin, represents the surface expression of the interaction between magmatic and sedimentary domains. Its inception occurred in May 2006 and since then the crater continuously spewed huge amounts of mud, rock clast, water, gas and oil.

Previous studies have shown that the Lusi system is fueled by magmatic intrusion and hydrothermal activity from the neighbouring volcanic system 1-5. This new manuscript reveals that the intrusion must have occurred recently (Holocene, ~last 10 thousand years) and continues to drive the generation of hydrocarbons that are leaking to the surface.

The multidisciplinary study, involving scientists from CEED, the Federal Institute for Geosciences and Natural Resources (BGR), Department of Geosciences (UiO), and Utrecht University published in Scientific Reports, analysed rock clasts and oil that erupted at the Lusi crater and from the neighbouring hydrocarbon fields. The results indicated that hydrocarbons vented at Lusi have different geochemical properties compared to those stored in the adjacent hydrocarbon reservoirs. This excludes a direct link between these two systems.

Subsurface palaeo temperatures, estimated using several microscopy and geochemical methods, revealed discrepancies of at least 100 °C. These results are ascribed to the heterogeneity of the organic matter and the uneven maturation rate of its particles under a rapid heat impact. Alexandra and colleagues report the ongoing hydrocarbon generation beneath Lusi and propose a geological model describing hydrocarbon migration pathways. This study highlights the importance of the application of specific methods for temperature estimations in the sedimentary basins affected by recent volcanic activity.

The work was funded by the by the European Research Council under the European Union's Seventh Framework Programme Grant agreement number 308126 (LUSI LAB project, PI A. Mazzini) and Research Council of Norway through its Centres of Excellence funding scheme, Project Number 223272 (CEED) and Unge Forskertalenter project ‘Ashlantic’, project number 263000.