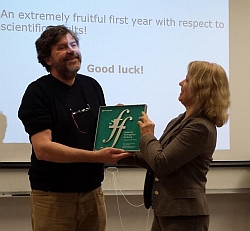 Over the past year Centre for Earth Evolution and Dynamics (CEED) has grown to about 40 full-time and part-time scientists and students. We were supposed to have moved to a new place (the ZEB building opposite the Geosciences building) by March 1st but we are still stuck in an overcrowded Physics Building for another 5 months or so. This is not optimal but beyond our control.

CEED has been organized into five thematic groups, the Dynamic Earth, Deep Earth, Earth Crises, Virtual Earth, and Earth and Beyond. The Dynamic Earth focuses on plate motions and Earth history and highlights in the past year include participation in the RHUM-RUM experiment to study a mantle plume (La Réunion) from crust to core; our discovery of a new microcontinent in the Indian Ocean received unprecedented media attention and were among the 10 most-read news stories of the year in Nature. Earth Crises research is centred on large igneous provinces, mass extinctions and environmental changes. Activities over the past year have focused on understanding the role of volcanism on the climate change 55 million years ago (the so-called Paleocene-Eocene Thermal Maximum), and during the Earth’s greatest mass extinction at the end of the Permian (251 million years ago). Our work with international collaborators on the Siberian Traps has generated wide interest in the media.

Earth and Beyond  focuses on similarities and differences between Earth and other terrestrial planets, and notably why Earth is the only planet with plate tectonics. We have traced the oldest preserved surfaces of Mercury, Mars, and the moon, with moon probably having the oldest. In 2013 we identified the source crater for the largest group of Martian meteorites (shergottites) found on Earth, and our findings will soon appear in Science.

Deep Earth research deals with the mineralogy and dynamics of the lower mantle. Ongoing high-pressure experiments and computations provide constraints on the structure and convective movements near the core-mantle boundary. A paper in Nature (June 27) speculated on how dense anomalies in the lowermost mantle can organize the global mantle flow. The Virtual Earth theme focuses on computational models of convection within Earth's mantle. In 2013 we studied the stability of dense anomalies in the lower mantle, and showed through numerical modelling that such anomalies may have been stable for the past 410 million years. Our work on linking surface magmatism with plumes from stable anomalies in the Deep Earth was portrayed in Science (April 5) last year by Richard Kerr (The Deep Earth Machine Is Coming Together). Whether these stable dense anomalies at the core-mantle boundary are hundreds of million years old is still controversial (Nature Brief Communications), and we take the challenge to undertake more research in this direction.