Illustration: Earth and beyond and satellite data

To compare the formation and evolution of planets and the Earth, we use information collected by satellites. The data could be images, topography, the figure of the planet, gravity, reflectivity of the surface, or other spectral information.  Global views are often mosaics of many smaller images, or track data, which need to be processed first and can be displayed with software such as ArcGIS. 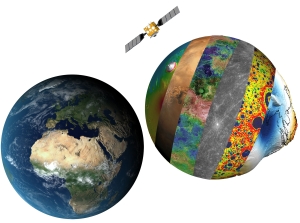 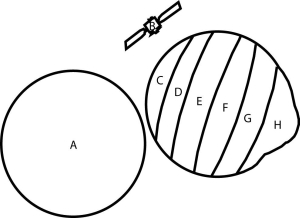 Model: Earth and Beyond. Illustration: CEED

Explanation to graphics: (A) Satellite images and cloud cover mosaic of the Earth. (B) ESA satellite Mars Express. (C) NASA Mars Orbiter Laser Altimeter -derived topography of Mars. (D) NASA Mars Orbiter Camera -derived  colored image of Mars. (E) NASA Magellan derived and colored radar altimeter reflectivity map of Venus. (F) NASA Messenger fly-by image of Mercury. (G) NASA GRAIL derived free-air gravity map of the Moon. (H) 3d graph of the exaggerated geoid heights based on the EGM2008, the  geoid is a equipotential surface, and would be the shape of the Earth under the influence of gravity if it would ocean everywhere.