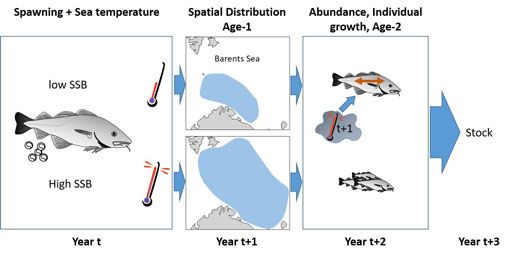 Figure 1. Effect of the change in distribution of age-1 Atlantic cod on age-2 length and abundance. The figure shows that age-1 cod growing up in the western Barents Sea have relatively higher mortality but faster growth to age-2 than the ones distributed farther east and that the distribution is both depending on sea temperature and stock size. Higher sea temperature leads to faster growth to age-2.

The Arcto-Boreal ecosystem is facing rapid changes in the environment due to global change; there is a strong interest in understanding the responses of marine species of this ecosystem, particularly for commercially important stocks. For our study (Durant et al. 2021), we analysed 24-years of indices of spatial distribution of 1 year old Northeast Arctic (NEA) cod Gadus morhua (age-1) from the Barents Sea joint Norwegian/Russian winter survey to study the role of distribution for the change in abundance and mean body size through their second winter of life. Our aim was first to assess the effect of spatial distribution of age-1 cod juveniles on survival and growth to age-2 and second to investigate whether age-1 distribution was correlated with potentially influencing variables such as population density, demographic structure, temperature, and water inflow to the Barents Sea.

The NEA stock of cod is of high economic and ecologic importance in the Barents Sea. When mature, these cod migrate to the coast of Norway to spawn, the produced eggs, larvae, and early juveniles drifting with the current to the Barents Sea where juvenile cod (0-group) are settling (Ottersen et al., 2014). The young 1 year of age cod (age-1) seem then to remain in the area where they settled during autumn as 0-group. Previous studies have shown that NEA cod juveniles in the eastern part of the distribution seem to have higher survival through the first winter (from age-0 to age-1) than juveniles farther west (Ciannelli et al., 2007; Stige et al., 2019). In our study, we focus on the transition between the two first surveyed age classes after settlement (age-1 and -2) to assess the association between spatial distribution of age-1 cod juveniles and survival and growth to age-2.

Cod growth is not the same everywhere in the Barents Sea

By accounting for length the juveniles had at age-1 (Figure 2) we were able to look at the growth they experienced to age-2. Our analysis showed that the location where the age-1 NEA cod are in the Barents Sea matters for their growth and survival from age-1 to age-2 (Figure 2). Figure 2 shows that age-1 cod year-classes growing up in the western Barents Sea have relatively faster growth to age-2 than the ones distributed farther east. Our model indicates that the sea temperature also affect the growth with faster growth to age-2 when temperatures area higher.

By accounting for the juvenile abundance at age-1 (Figure 3), we were able to look at their survival to age-2. Our results showed that the more east the settlement occurs, the higher is the survival (as shown by the abundance at age-2, Figure 3). Figure 3 shows that age-1 cod growing up in the western Barents Sea have relatively higher mortality to age-2 than the ones distributed farther east.

What determines the distribution of young cod in the Barents Sea?

We showed that depending on where they are growing in the Barents Sea, age-1 cod have different survival or growth (Figure 1). These results thus indicate that the conditions encountered at the location of settlement (being biotic and abiotic) may influence the spatial survival and growth of age-1 cod. In turn, this may affect the population dynamics through effects on the recruitment to the population.

To try to understand what determine the distribution of young cod, we tried to find which factors that could cause a change in age-1 cod distribution. As candidate factors we explore the potential effect of the stock size and age structure, the abundance of the juveniles, and the sea temperature. We found that the bigger is the spawning stock biomass the more north is the distribution of the age-1 cod. This suggests that the age-1 distribution may be a result of density-dependent habitat selection by spawners rather than by offspring, which is consistent with juvenile cod having limited capacity for self-propelled movement over long distances.

A better understanding of how species distribute and survive over space is a central challenge in fisheries ecology. At high spawning stock biomass, cod may tend to use the northernmost spawning grounds more than at low spawning stock biomass, causing an expansion of the offspring into the colder, northern parts of the Barents Sea, resulting in low growth rates and low mean size of juveniles. At the same time, the distribution changes are associated with changes in survival, with the net effect depending on spatial patterns in growth and survival through the entire early-life period until the juveniles are large enough to determine their own distribution