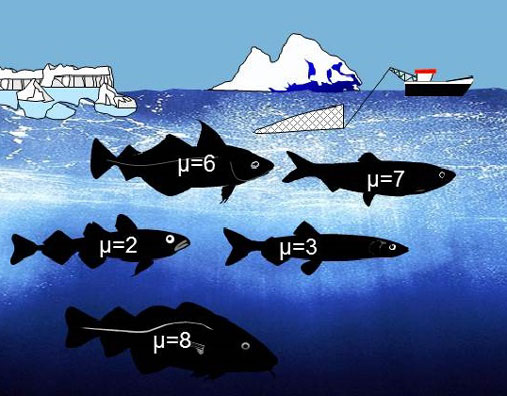 In a comparative study investigating in five of the most (ecologically and commercially) important stocks in the Barents Sea (Jakobsen & Ozhigin 2011): Northeast Arctic (NEA) cod (Gadus morhua), NEA haddock (Melanogrammus aeglefinus), capelin (Mallotus villosus), Polar cod (Boreogadus saida) and the Norwegian Spawning (NSS) herring (Clupea harengus), with contrasting life histories and trophic positions (Figure 1), we have characterized the sensitivity of population growth rate to recruitment. The species chosen for our study represent different levels of the food chain: capelin, herring and polar cod are pelagic, planktivorous fish and a crucial trophic link between zooplankton and top predators, while cod and haddock are demersal fish feeding on a mixed diet including fish and benthic animals.

In a previous study (Durant et al 2013), we have compared, for seven stocks of gadoid fish (3 species in 7 ecosystems),  the effects of fisheries on population growth rate and the sensitivity of population growth to climate as well as the role of changed population structure in mediating these effects. We found that there was a general tendency of an increase of the population growth with the increase of the contribution of recruitment (Figure 2). The results of the new study comfort these previous results, the elasticity to recruitment being primarily affected by long-term changes in age structure of the population, typically caused by fishing, while there is little or no additional effect of the ongoing fishing pressure. In general, we found no effect of ongoing fishery pressure on model results after age structure has been taken into account, supporting the view that long-term fishing pressure affects the population's susceptibility to climate indirectly, by changing the stock's age structure.

Our results indicate that under warmer conditions, population growth of high latitude stocks becomes increasingly dependent on recruitment. Thus, while future global warming may result in generally more productive Barents Sea fish stocks, it will however make them more sensitive to climate fluctuations and less sensitive to fishing pressure. The latter will make the stock more difficult to manage by modifying the fishing pressure. . However, for most of the stocks studied here, populations have low elasticity to recruitment, meaning that management, not climate, is to blame if the stock declines. More than ever, taking recruitment variation into account is essential for stock management.