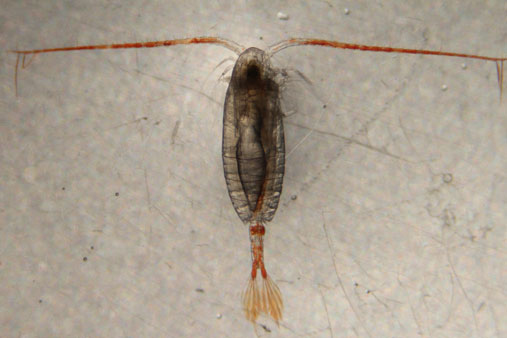 The large and lipid-rich copepods Calanus glacialis (Norwegian: ishavsåte) and Calanus hyperboreus (Norwegian: feitåte) dominate zooplankton biomass in the Arctic Ocean and play important roles in the ecosystem. During the long arctic winter, these copepods enter a form of resting stage called diapause, surviving on lipid reserves accumulated during the short growth season. These lipid reserves constitute an important energy source for other animals, including fish, marine mammals and birds. Moreover, by descending to deeper waters for diapause, Calanus copepods are a “carbon sink” that can play a large role in the global carbon budget (Jónasdóttir et al. 2015).

Diapausing at depth comes with several advantages. For example, staying in colder, deep waters enable copepods to lower their metabolism and survive longer on lipid reserves. Increased water density at depth may also allow them save energy by remaining neutrally buoyant. Importantly, predation pressure from visual predators is also lower in the darker, deep water. But although diapause is a key part of their life cycle, few studies have investigated Calanus’ vertical distribution over large spatial scales. In particular, logistical challenges limit data availability from the Arctic Ocean during the ice-covered winter season.

In a study recently published in The Biological Bulletin (Kvile et al. 2019), we (Kristina Øie Kvile with colleagues from Woods Hole Oceanographic Institution) compiled all published data we could find and investigated the distribution of Arctic Calanus in winter on a pan-arctic scale. We found that despite the common view of diapause at depth in winter, both C. glacialis and C. hyperboreus have a broad depth distribution, indicating that some parts of the population remain active in winter. Nevertheless, their distribution is generally deeper in winter than in summer, and tends to deepen with available bottom depth. Over shallow shelf seas, deep diapause habitat is unavailable but there are still high abundances of Calanus in winter. These are possibly “topographically blocked” and suffering greater loss to predation (see also Aarflot et al. 2019).

Our study also demonstrates that C. hyperboreus descends deeper than C. glacialis in winter. We speculate that this is due to higher predation pressure on the larger and more conspicuous C. hyperboreus. Interestingly however, the depth distribution of C. hyperboreus tends to become shallower when we move north towards the central Arctic. If copepods descend for diapause to avoid predation loss, the incentive for tasty copepods like C. hyperboreus to migrate should be lower in the central Arctic Ocean where visual predators such as pelagic fish are less abundant. Our results seem to support this.

Although analyzing existing observational data allowed us to obtain new insight into the “winter life” of Calanus copepods, the inconsistency in data from the Arctic Ocean makes it hard to draw conclusions on the drivers of Calanus’ depth distribution during diapause. To improve our understanding of these key species’ life cycle, we encourage more consistent sampling efforts in the central Arctic.