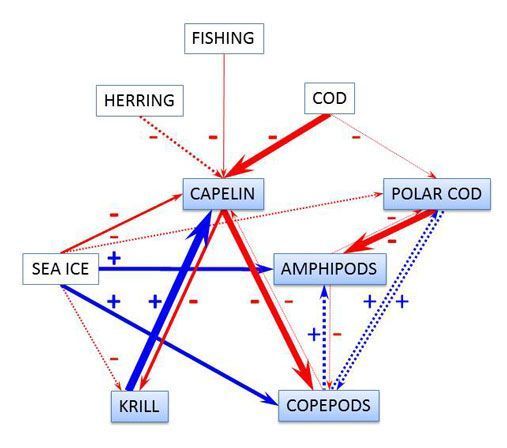 Figure 1. A schematic presentation of how climate, as represented by annual sea ice cover, influences the food web in the central and northern Barents Sea. Climate affects the species directly as well as indirectly through predators, competitors and prey.

Many ecosystems at high latitudes are dominated by relatively few species and strong species interactions. That is also the case for the pelagic ecosystem in the central and northern Barents Sea, where three zooplankton groups and two pelagic fish species dominate as the main links between the primary producers and top predators such as cod, seals and humans (Figure 1). The main pelagic fish in this system is the capelin (Mallotus villosus), which has collapsed in abundance four times the last four decades, most likely because of predation from herring (Clupea harengus) and cod (Gadus morhua). The consequences of these collapses have been boosts in the populations of the main prey of capelin, which are copepods and krill, and a poor condition of predators of capelin, in particular cod and seals. The other pelagic fish in the region is the polar cod (Boreogadus saida), which competes with capelin for copepod prey. In addition, polar cod feed on pelagic amphipods, in particular a carnivorous amphipod species that has copepods as its main prey. The amphipods are thus both competitors with and prey of polar cod. On their side, copepods and krill are mainly herbivorous and feed on phytoplankton and, in the case of the copepods, also on ice algae.

When species interactions are strong, climate effects on one species will also affect its predators, competitors and prey, often with time lags. In a recent study we analysed the direct and indirect effects of climate variability on the pelagic food web in the central and northern Barents Sea. This statistical analysis was based on observations over the last 35 years of the year-to-year variations in the biomasses of the fish species and zooplankton groups shown in Figure 1. We focused on a key climate variable: sea ice cover in winter, which has decreased dramatically over the last decades, transforming large areas from being seasonally ice-covered to becoming ice-free all through the year. The analysis explained the biomass variations in each of the fish species and zooplankton groups as functions of sea ice cover and biomasses of the other fish species and zooplankton groups.

We found that the biomasses of krill and capelin tended to increase in years with low sea ice cover, whereas the biomasses of copepods and amphipods tended to decrease. We termed these statistical associations between sea ice cover and biomasses as “direct” climate effects, but noted that the mechanisms might involve factors such as timing and amount of algae production. We termed associations through the other fish species and zooplankton groups as “indirect” climate effects. These effects occurred with time-lags of one year or longer. Specifically, the analysis showed strong top-down predation effects by capelin and polar cod on the different zooplankton groups as well as strong bottom-up effects the other way (as indicated by the widths of the arrows in Fig. 1). The direct effects of sea ice on each of the fish species and zooplankton groups indirectly affected the other through these top-down and bottom-up effects. For example, increased biomass of capelin in a year with low sea ice cover led to increased predation pressure on copepods and krill the following years. Low sea ice cover thereby had an indirect, negative effect on copepods and krill that operated through capelin. In general, the magnitude of these indirect effects was on the same scale as the direct effects.

Why are these findings important?

Let us look at the krill and the copepods. Our analysis showed that the direct effect on krill of a warmer climate with low sea ice cover in the central and northern Barents Sea is most likely positive. This is not surprising, given that the dominant krill species have the centres of their distributions farther south and reach their northern distribution limits in the central and northern Barents Sea. From a “bottom-up” perspective, increased krill biomass in the region is the expected effect of warming. However, our analysis showed that as capelin biomass also tends to increase in warm years, the boost in the krill biomass may only be temporary, as predation pressure on the krill may increase. Whether krill biomass will increase or decrease in a warmer climate therefore also depends strongly on what happens to their main predator, the capelin. For the predominantly arctic copepods in the region, it is simpler. The direct effect of warming is negative. In addition, they are likely to face increased predation in a warmer climate. For these copepods, both the short-term and the longer-term effects of warming are therefore negative.