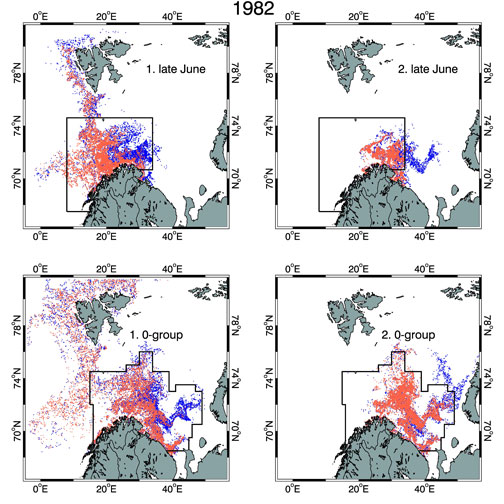 Theory on reproductive strategy suggests that there is often a trade-off between offspring fitness and parental cost (Lack 1954). In marine fish, such as the Northeast Arctic (NEA) cod, maternal effects (non-genetic reproductive traits) may affect the offspring through egg condition such as size, fat content, and buoyancy, but also spawning location and time (Green 2008). For many fish populations, including NEA cod, spawning involves extensive parental migration. For such migrations to be beneficial, the cost of the migration must be outweighed by payoff in, for example, increased survival and growth of the offspring.

For NEA cod, the parental cost of southwards migration has been suggested to be beneficial due to increased offspring survival caused to temperature driven increase in growth and development through early vulnerable stages (Opdal et al. 2011). This result was based on modeled cod eggs and larvae in an oceanographic model. Recently, we investigated if this result would also be valid if we accounted for empirically estimated mortality fields (Langangen et al.  2014, Ciannelli et al. 2007). By releasing about 100 000 individual particles representing cod eggs, larvae and juveniles annually (1980-1993) in an oceanographic model, we investigated the survival through the first year of life. We tracked the positions of the cod offspring from spawning in March and April to settlement in October (Fig.1). In this process we also accounted for how mortality of the offspring varies in space. Based on this analysis, we did not find any evidence for increased offspring survival with increasing distance from the Barents Sea, a proxy for parental migration distance. However, we found that offspring size tends to increase with distance from the Barents Sea.

Our study demonstrates that accounting for spatial differences in mortality across multiple life stages may be very important when evaluating the reproductive strategy of migratory marine fish. Specifically, our results indicate that the main fitness benefit of southwards migration and spawning in NEA cod is not higher offspring survival the first months of life, but rather the beneficial effects of the offspring acquiring a large size.