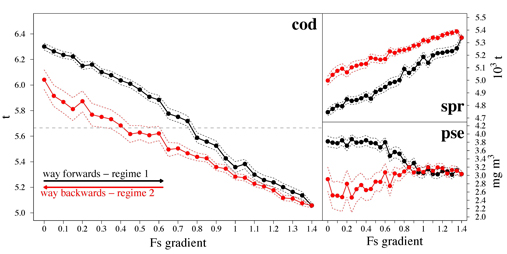 In a study recently published in Proceedings of Royal society of London, we simulated the Baltic Sea cod stock development, under current and past weather conditions for different fishing scenarios, and conclude that this resource will never recover the status it had more than three decades ago. The expected future biomass levels will not only be lower than those observed in the past but more variable, given the current climate conditions. The economic losses associated to the characteristics of the new baseline amount to approximately 120 million euros per year.

A central issue in the science of ecosystem management is the assessment of the chances of restoration of fish stocks in an ecosystem context. To determine whether it is possible to regenerate a degraded ecosystem to its previous status it is necessary to understand the processes that regulate the relationships between food web components and their interaction with the natural and anthropogenic drivers. It is also important to assess whether these processes can be assumed to be the same in the current degraded state or, alternatively, different from those observed in the previous (more desirable) state.

In the late 80s a drastic change occurred in the ecosystem of the Baltic Sea. The severe reduction of the population of cod caused an increase in the abundance of its main prey, the sprat, which in turn produced a decline in the abundance of this species main food, the copepod Pseudocalanus acuspes. In brief, the food web changed from being dominated by a large piscivore (cod) cod to an alternative configuration dominated by planktivores (small pelagics). Since these changes were persistent and wide-ranging, the whole phenomenon was termed ‘the Baltic Sea regime shift’.

The challenge of anticipating to which degree this degraded (and reorganized) ecosystem could be set back to its previous configuration was the main question that motivated this study. At the same time we also wanted to account for the ecosystem state as a whole -in terms of configuration and functioning- rather than focussing on the economically most important species, cod. Fortunately, the Baltic Sea is one the world’s richest ecosystems in terms of historical records, and comparable times series covering the most important food web components extend back to the 1970s, before the regime shift. This allowed us to model ecosystem dynamics before and after the regime shift, covering well the two configurations.

Acknowledging the existence of a regime shift in this ecosystem and the profound implications this type of events have on the overall functioning of the food web it seemed reasonable to expect changes in the relationships among components and/or in the way they respond to external forcing. To be able to account for regime-dependent relationships and incorporate these in the simulations we analysed the Baltic time series using threshold Generalized Additive Models (tGAMs). These are an extension of traditional GAMs with the advantage that they allow the type of relationship between the response and explanatory variables to change below and above a certain value of a threshold variable. This approach had been previously used by our group in the Black Sea (Llope et al. 2011) and the North Sea (Llope et al. 2012) where comparable regime shifts were described.

Contrary to our expectations, not many relationships turned out to be non additive (or regime-dependent). Among them, we found that the abundance of the copepod Pseudocalanus acuspes (main prey for cod juveniles and small pelagics) was primarily controlled by small pelagics (top-down) when these were abundant. However, when cod ruled the ecosystem and hence were able to control the abundance of planktivorous fish, the resulting reduced predation pressure upon this copepod species allowed the environment to have a bottom-up effect on them. In particular we found a positive effect of salinity pulses on the abundance of Pseudocalanus only when cod levels were high (see Figure 3 in the paper).

The models captured other interesting effects previously described in the system, such as (1) a 2-year lagged effect of Pseudocalanus on cod, which captures the positive effect of this copepod on larval and juvenile survival, (2) a negative effect of cod on sprat, which represents predation or (3) a negative, non linear effect of sprat on cod, accounting for sprat predation on cod eggs (see Figure 3 in the paper). The latter effect is known as the ‘prey-to-predator loop’ and has been suggested as the feedback mechanism that keeps the system locked in its current configuration, preventing cod from rebuilding. The food web interactions, which included lags and non linear responses, together with the responses of these trophic groups to the key drivers of fishing mortality and environmental conditions, provided us with a tool to simulate the whole ecosystems under a range of conditions (see Figure 2 in the paper).

Specifically, we estimated the response of the cod to a fishing pressure gradient (increasing and decreasing) and two types of weather conditions:

• Those registered in the decades prior to the regime shift, characterized by low temperatures and high salinity levels (regime 1 in Figure 1);

• Those observed after the regime shift, which are warmer and less saline. (regime 2 in Figure 1) 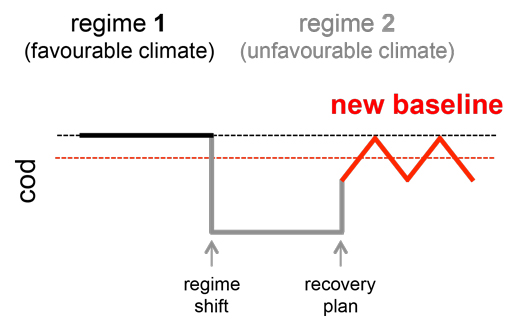 Figure 2.Schematic summary of the changes in the Baltic Sea ecosystem baseline, observed (black, grey) and predicted (red) by our modelling exercise.

Our results showed that given the current weather conditions, the Baltic Sea will no be able to recover the historical catch levels observed before the collapse of the fishery, even with drastic precautions (Figure 1). Instead, the ecosystem regenerates towards a new ecological baseline, characterized by lower and more variable biomass of cod (Figure 2). 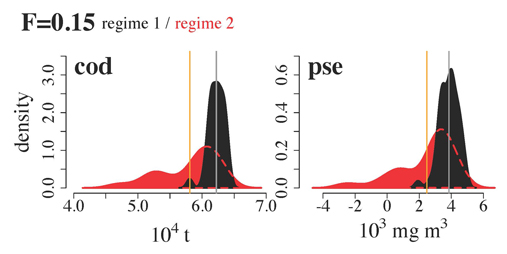 Figure 3. Histogram of the 100 simulation values used to calculate the mean and standard deviation showed in Figure 1 for cod and P. acuspes at a fishing mortality of 0.15. Black correspond to regime 1 conditions while red was used to plot values from model runs under regime conditions. Vertical lines mark the mean.

Figure 3 shows the frequency distribution of 100 simulated values of cod and Pseudocalanus for a low fishing mortality of 0.15. It is important to note that not only the average value is lower for the current environmental conditions (regime 2, red) compared to the previous regimes (regime 1, black) but also the range of values is significantly wider, hence the uncertainty is higher.

The biological output was then compared to economic expectations. This allowed us to translate the ecological regeneration potential into societal costs. While the economically optimal exploitation levels differed only slightly between the two different conditions, the annual profit was considerably lower for the second, dropping from 230 million euros to 140. This is because total economic costs also have to include societal costs, particularly losses in consumer surplus, which amounts to approximately 30 per cent of fishing profits under optimal exploitation. Therefore, the socio-economic assessment shows that the ecological signal is amplified at the level of societal costs, owing to increased uncertainty in biomass levels.

This research suggests that the pathways that an ecosystem takes in its regeneration processes depend on the interaction of human activities (fishing, in this case) and the environment, and that the result of this interaction may have important economic and social consequences. The regeneration of an ecosystem to an economic target may therefore not be straightforward, as there are multiple interacting drivers involved that need to be considered and understood. It is important that future policies embrace this evidence in order to maintain our ecosystems not only healthy, but also financially sustainable.