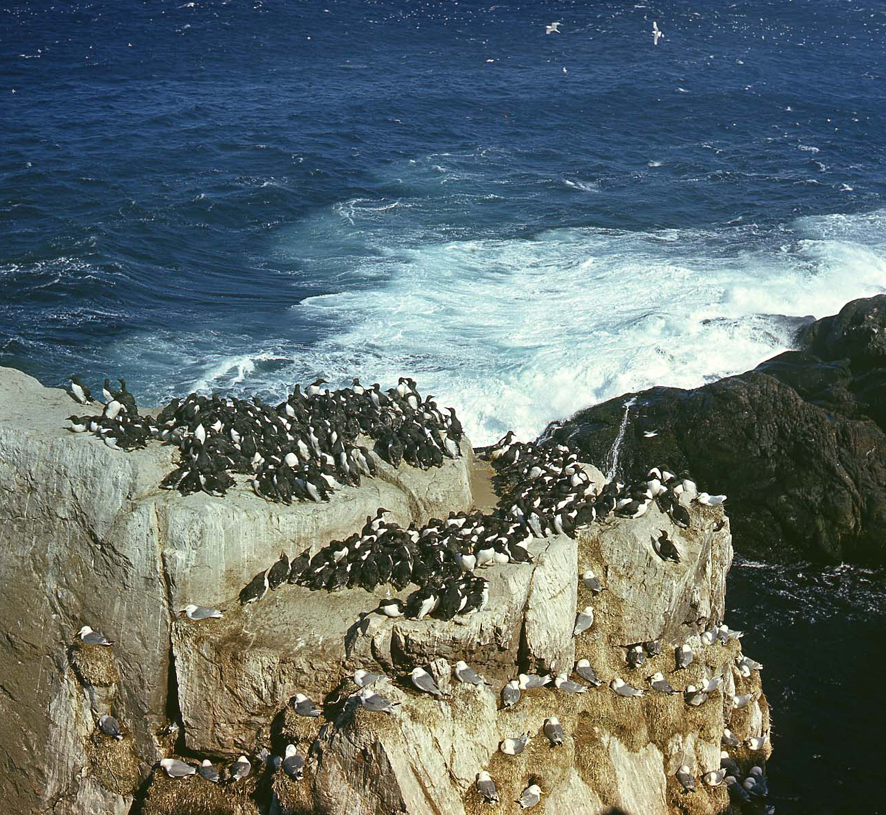 In a previous blog we presented a study of the diet of some Barents Sea top predators (cod, black-legged kittiwake, common guillemot, and minke whale). This study was the logical follow up of a previous work on seabirds competition.

During reproduction, seabirds are confronted to a conundrum. They find their food at sea but must be at land to breed (lay egg(s) or raise chick(s)). Due to these constraints seabirds are rooted to a spot on the coast/island and make regular trips at sea to hunt, always returning to this central place (Central place foragers) where their chicks require their care. The duration of the trips (then the distance) is determine by the flight capacity of the seabird but also by the time the bird can be away from its egg(s)/chick(s). These constraints and more make that to be  adequate a nest site must answer many criteria (quality of the soil, low predation, near food source and low competition by other species).

Breeding site selection can strongly influence the outcome of individual breeding attempts through effects of predator exposure, parasitism or protection against harsh weather. It is thus not surprising that food availability, and also space availability to some extent, were used to model seabird population variation. The availability of a limited resource, whether nesting site or food, is also modified by the number of individuals that are sharing it that are conspecific or non-conspecific.

In our study published by Oecologia, we studied competition between seabirds in a mixed colony (groupings of different species) in the Barents Sea. In mixed colonies, seabirds may have to cope with interspecific (between species) and intraspecific (inside the same species) competition for both food and space resources.

This collaborative work with Russian scientists take advantage of field data on breeding populations in three species of seabirds: black-legged kittiwake (Rissa tridactyla), common guillemot (Uria aalge) and Brünnich’s guillemot (Uria lomvia) collected over 30-years at Kharlov Island in the Barents Sea. All three species are small piscivorous seabirds, preferentially consuming small schooling fish (max. ca. 200 mm long), such as the capelin (Mallotus villosus), but differentiated by their fishing techniques and the breadth of their diet. While diet segregation can occur at some colonies, this is not the case at Kharlov Island where the diets of the kittiwakes and guillemots significantly overlap.

This indicates that when many kittiwakes breed, less guillemots may do it in a classical space competition pattern. Indeed, at Kharlov Island kittiwake usually arrived to breed before guillemots.

The competition model shows that the number of breeding kittiwakes can have a negative effect on common guillemots after a certain level of filling of the breeding space is reached (ca 19000 pairs). One hypothesis may be that the two species are in contact only after reaching this threshold. In other words, before this threshold is reached, the positive relationship between the common guillemot and kittiwake populations may be an indirect effect that indicates an improvement of the feeding conditions, i.e., capelin abundance. After the threshold is reached, the breeding space is full and a negative effect on the guillemot population can appear, perhaps due to increased aggressiveness or increased parasitic loads.

With climate warming, one can expect that the warmer current coming from the Atlantic to the Barents Sea to be more often and to displace the spawning ground of capelin north- and eastward. In other words climate warming may lead the fish away from the Norwegian seabird colonies but nearer Kharlov Island.