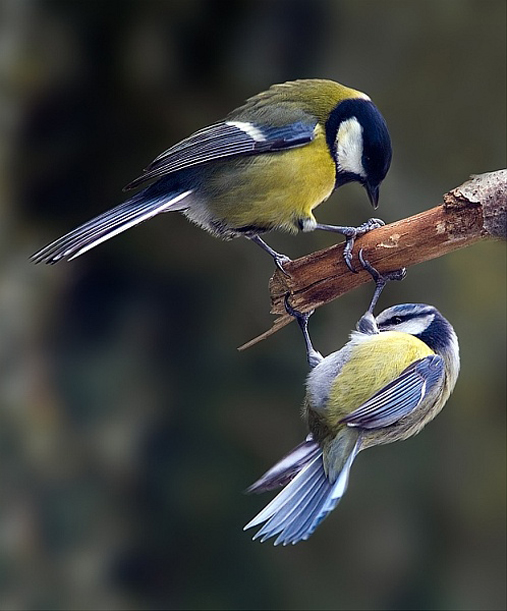 Figure 1. We studied the effect of year-to-year variation in climatic condition on the competitive interaction between two European tit species, the blue tit (Cyanistes caeruleus) and the great tit (Parus major). These species compete for food during the breeding season and for the use of cavities for night roosting during winter. Photo of a great tit and blue tit by Martin Mecnarowski via Wikimedia Commons.

Climate change is expected to have profound ecological effects, yet shifts in competitive abilities among species are rarely studied in this context. In a previous post, I presented a study on competition between some seabirds (black-legged kittiwake, common guillemot) in a mixed colony (groupings of different species) in the Barents Sea. In such mixed colonies, seabirds may have to cope with interspecific (between species) and intraspecific (inside the same species) competition for both food and space resources. This study however was for one site only and didn’t address the potential non linearity in the relationship.

The idea for the study published in April in The Proceedings of the Royal Society started many years ago while trying to isolate nonlinear effect of climate change on species interactions. In 2002, Stenseth et al. suggested that the competition between two sympatric flycatchers could be affected by climate in a non-linear (threshold) way (Figure 2). Abrupt, often threshold-type, changes is not uncommon. It is even the rule rather than the exception in the recruitment dynamics of marine fishes. 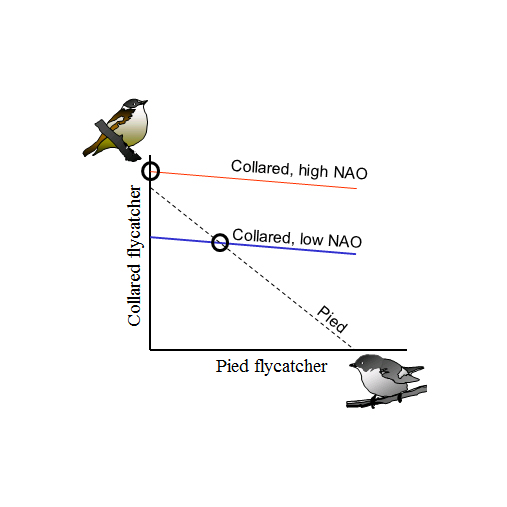 Figure 2. Hypothesis on nonlinearity. The breeding ranges of the pied flycatcher (Ficedula hypoleuca) and collared flycatcher (F. albicollis) overlap in central Europe. During periods with high positive values of the North Atlantic Oscillation (NAO) index, the collared may outcompete the pied flycatcher, whereas during periods with lower values of the NAO index there may be a balanced competitive interaction between the two species leading to stable coexistence. Isoclines (i.e., density-combinations for which each of the species does not change in density) are deduced from Sætre et al. (1999).

Looking to test this hypothesis, and true to our wish of ecology unity (see post on the subject), we contacted bird ecologists (UK, Netherlands, Sweden, Belgium...). Great tits and blue tits (Parus major and Cyanistes caeruleus) are two common passerines that compete for food and roosting sites, yet coexist across much of their range. The advantage is that these two species are studied jointly by several groups in Europe for many years. In other words, it was possible to obtain long-term population time series for four spots in Europe.

We used these time series to estimate the competition between these two species using mathematical models (see the paper: Stenseth et al. 2015). The originality of our approach is that we did not stop at a classical competitive model (a la Lotka Volterra) but also tested for non-linearity. In our case, it means that the effect of species i on species j can be different depending on the environment, e.g. temperature in spring. For instance, when the temperature is under the threshold value, the species i is using most of the resources and the species j has a hard time, while when the temperature is above the threshold the effect of the competition on species j by species i is less intense and both species can cohabit in harmony. Mathematically, this is written by a set of two equations (one for above the threshold one of under), the one to apply on the data depends on the environmental conditions.

Among the four European sites studied, one showed such non-linearity (Figure 3). In this case, the competitive effect of great tits on blue tits changes with spring temperature. When spring temperatures were colder than 9.7 °C, great tits had a higher equilibrium density than blue tits (black dot on Fig. 3) while this relative abundance was switched during warmer springs (red dot on Fig. 3). In other words, great tits have an advantage over blue tits during colder years. This case study confirms the hypothesis of Stenseth et al. 2002. However, the understanding of the mechanisms explaining this result is less evident. 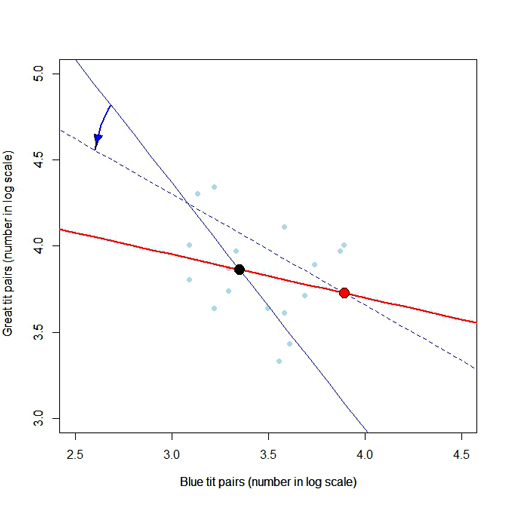 Figure 3. Zero-growth isoclines for sympatric populations of great tits (bold red lines) and blue tits (blue lines). The black dot shows estimated stable equilibrium points  and small light blue dots show the census data. The blue tits population shows a threshold interaction with an environmental variable (mean temperature conditions in spring). There is then for blue tits a different isocline (and equilibrium state) for temperatures below (blue line) and above (blue dotted line) the threshold of mean spring temperature of 9.7°C. The blue curved arrow indicates the direction of the change of the blue tits isocline with an increase of temperature over the threshold and the big red dot the corresponding new equilibrium point.

Temperature-dependent rates of caterpillar growth represent one possible mechanism involved in the observed effect of spring temperature on the interaction between great tits and blue tits. In general, blue tits eat smaller prey than great tits. During warm springs, the caterpillar food peak advances, tracked in parallel by both species. This in itself should not induce a change in competition, but in warm springs the caterpillar food peak also becomes narrower. If the time period during which blue tits should have a competitive advantage (because younger instar are smaller) is shortened, it would intensify competition between the two tit species. However, our results are counter intuitive with and advantage to blue tits over great tits (Figure 3). A reason for this result may be that the study site was part of a long-term experiment to test for the effects of differences in intra- and interspecific competition between great tits and blue tits in Antwerp (Belgium). The experimental treatment provided a surplus of large-holed nest boxes (diameter 32 mm; used by both tit species as nest site) and a surplus of small-holed nest boxes (diameter 26 mm; used by blue tits only) with many advantage to the smaller species (higher breeding density, higher survival, higher recruitment). In the other three study sites only large holed nest boxes were available. With climate warming in Northern-Europe, the chance to get spring temperature over the threshold will be more common (Figure 4). 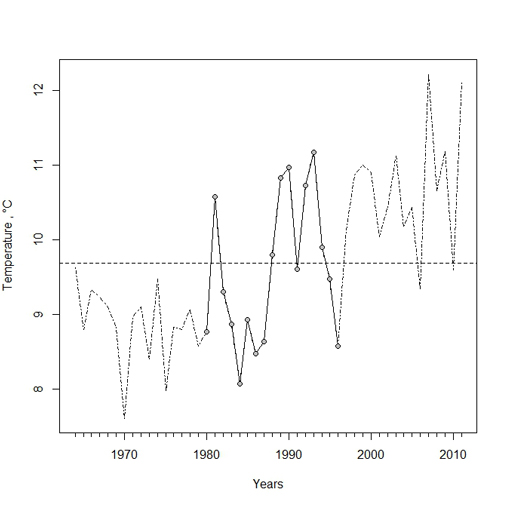 Previous work on population dynamics, species interactions and environmental variation has tended to focus on the assumptions that the environment may fluctuate around some mean value and affect maximum population growth rate additively. Here, we have extended this view by demonstrating that changing climate can indeed change equilibrium conditions, moving the system to a new state where a previously less abundant species becomes relatively more abundant. Our results highlight the need for future research—both empirical and theoretical—that considers how both short- and long-term environmental variation impact upon the form and outcome of species interactions.