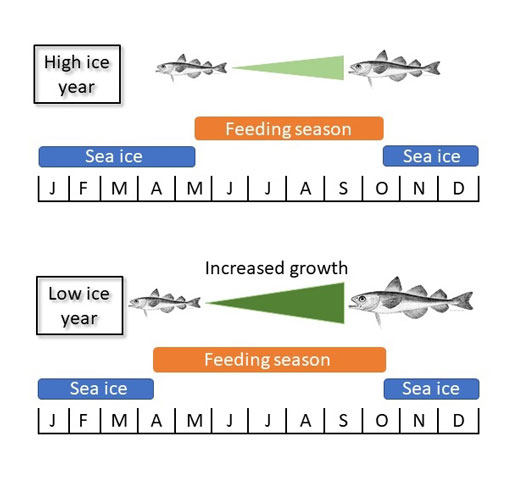 Figure 1. Decrease in sea ice is associated with faster growth of polar cod by extending the feeding season in year with low ice.

The Arctic experiences the largest environmental changes due to climate warming such as a strong decrease in sea ice cover and an important increase of sea temperature (Arctic Report Card, 2019). Our understanding about how those environmental changes affect Arctic marine species population dynamics is still sparse. Polar cod (Boreogadus saida) is a key forage fish species in the Arctic, adapted to the life under the sea ice, which channels energy from zooplankton to higher trophic levels.

In a study published in ICES Journal of Marine Science (Dupont et al., 2020), we studied how the growth of polar cod is related to changes in environmental variables. We used a 30 years long time series (1986-2015) of mean annual length for each age group (length-at-age) that compose the stock of polar cod in the Barents Sea. Using multiple linear regression, those time series were compared to annual observations of sea ice, temperature, prey biomass and predator abundance for the same period. Our results show a consistent negative effect of sea ice cover on length-at-age across all age groups. Prey biomass only affect the growth for polar cod of 1 year of age while, for all ages, the length is related with the annual mean length the previous year.

Our results suggest that when sea ice cover decreases polar cod may grow faster in the Barents Sea. Such sea ice cover decrease have also been suggested to lead to higher survival (Bouchard et al., 2017) highlighting the positive effect for the stock. This could be due to the longer ice-free water period in spring in the Barents Sea when the sea ice cover is reduced. With less sea ice, increase in light and temperature in the water column early in the season give better access to food for young polar cod hatched early during spring. Early hatchers can thus have a longer growing period and become bigger to face the next winter. For the other age groups, decrease in sea ice may also mean a longer feeding season. In the Canadian Arctic waters, decreased sea ice has been linked with an early start of the phytoplankton production season resulting in an improved production of polar cod’s prey (LeBlanc et al., 2019).

While an increase in length-at-age may be interpreted as a positive population effect, the polar cod biomass stagnates (Stige et al., 2019). The association between increase in length-at-age and decrease in sea ice may only be short lived as a continuous decrease in sea ice may eventually lead to desynchronization between phytoplankton and zooplankton (the polar cod’s prey) with a negative effect on the polar cod stock in the Barents Sea as a result.