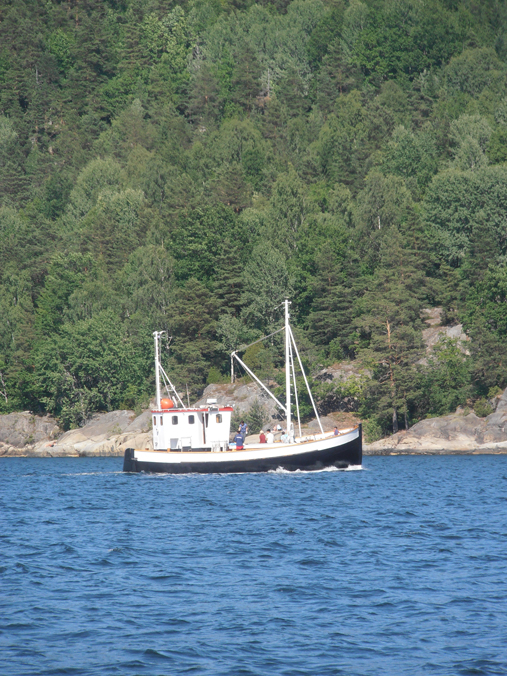 Spatial ecosystem models are a useful tool for implementing the Ecosystem-based approach for fisheries management. However, critical evaluation of such tools is needed, before they can be considered for management advice. In a recent study, we evaluated the predictive capability of Ecospace, a spatially explicit ecosystem model, calibrated for the North Sea ecosystem. We compared spatial predictions of fish biomass and fishing effort distribution with data.

Our results show that the Ecospace model of the North Sea can reproduce spatio-temporal dynamics of a large number of fish species satisfactorily. However, the spatial prediction of fishing effort does not match the available data. What are the implications of our finding?

Ecospace is the spatial version of Ecopath with Ecosim, a widely used ecosystem modelling tool, used to design a trophic network based on the assumption of mass-balance within a system. Ecospace brings the trophic interaction on the spatial dimension by splitting the total biomass in spatial units (“cells”), connected through dispersal of fish. Ecospace has been mainly applied for the study of the effect of fishing closures (of which MPAs are one example) on target species, their predators and preys, and the fisheries relying on such target species.

Typically, a fishing closure is established in order to protect one target species. A certain area is closed to fisheries, and the expected benefit derives from the diminished fishing mortality on the species in that area. If the target species is effectively protected within the closure, it will increase in abundance and  biomass. To sustain this increase, the target species requires more food. Its prey species therefore might suffer excessive predation, decline, and (unless another prey species is available) result in turn a decline of the target species. Contemporarily, an increase in the target species may attract predators in the closed area: this can result in increased predation, and decline in the target species. Moreover, when a closure is set, fishermen will move elsewhere to fish: the overall fishing pressure will be the same, but concentrated in a smaller area, i.e. where fishing is still allowed. Hence, an increased fishing pressure is exerted on the unprotected system. If the target species moves in and out of the fishing closure, the overall fishing pressure can be higher than it was before the onset of the closure. All in all, as we see, the effects of closing an area to fisheries might have several unexpected consequences which can hamper even the best effort for protection of a marine species, be it for conservation or fisheries management.

All these dynamics are affected by factors such as size and location of the closure, the characteristics of the target species (e.g. its movement rate), trophic interactions with prey and predators, and the behaviour of the fishers.

Ecospace can account for all these factors, and can therefore be a useful tool to evaluate the local and large-scale effects of policies such as closures on the different components of the ecosystem: target species, other species, and fisheries. This modelling approach has already proved useful to reach general conclusions on a theoretical level; but its application to real systems, let alone its use for management advice, requires a systematic evaluation of the model performance with data. Such evaluation is so far lacking in the literature.

In our study, we used an existing Ecopath with Ecosim model for the North Sea, and built an Ecospace model. Parameters for dispersal and trophic relationships cannot be optimised due to the lack of an optimisation routine that can look over the very large parameter dimension: we therefore applied an ad-hoc, manual procedure for parameter selection. 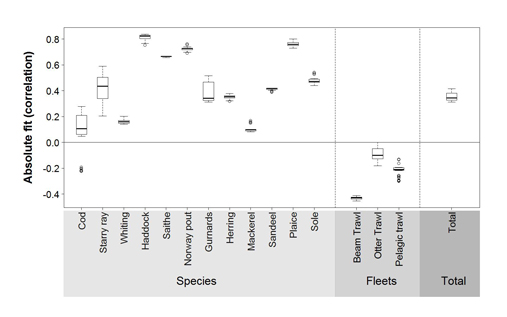 Focusing on model performance, we compared spatio-temporal prediction to data of biomass (for selected species) and fishing effort (for selected fleets). Our results (figure 1) show that the model manages to reproduce well the spatial and temporal biomass trends of all species tested: across parameter settings, positive fit between species biomass prediction and data was consistently observed. Conversely, the predictions of fleets effort did not match data: negative correlation values were found across all the parameter settings.

While these findings are encouraging for the biological component, we also must warn that any finding about spatial fisheries management can be seriously hampered by the limited capability of Ecospace to simulate real-life behaviour of fishermen. Given that fishermen’s behaviour cannot be replicated, neither can Ecospace provide prediction on changes of spatial effort in case of, for example, MPA placement. Importantly, these results are limited for the system we studied and with the parameterisation we performed; however, since no other study has ever compared spatial fishing effort predictions from Ecospace to data, it is likely that the problem might extend to other systems and models. For this reason we emphasize the need of validating spatial predictions of both biomass and effort with data.

Our hypothesis is that the model used for effort prediction (which is intuitively a valid model) cannot cope with the complex dynamics of the North Sea fisheries. The model is based on weighted profitability, so that effort is allocated spatially based on total effort, on predicted profitability of fishing in a certain area given the biomass of species therein and their prices, and the cost of sailing there. In the North Sea however fishermen do not necessarily go where the most profitable fish species are most abundant: they generally target one or few species, based on available quotas. When quotas for a species are reached fishermen will stop chasing them and switch to another species for which they still have quotas, irrespective of what is most profitable. Finally, price of fish on the market change on a daily or even hourly basis, which can cause fishermen to discard their catches if suddenly the price drops. This factor can’t be included by Ecospace where price is time-invariant, and time steps (generally monthly) do not allow to account for daily oscillations of fish price.

In summary, our results: i) call the attention of Ecospace model users on the need to validate models with data; ii) emphasize that effort prediction model is less than adequate in our case.

So what is next? We think that there is a need to develop an alternative model for spatial effort distribution that complement and substitute the present one, where this is not adequate. This tool, after appropriate parameterisation and validation with data, will be a step forward toward application of Ecospace for spatial ecosystem-based management by making it a legitimate tool for management advice.