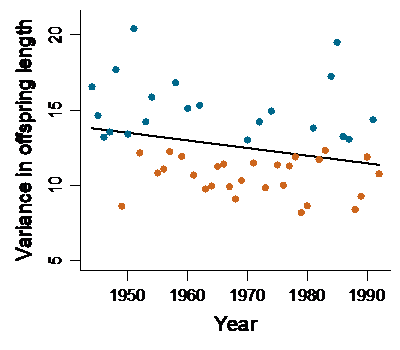 Figure 1: shows the variance in size of pike at age 1. The line indicates the mean decrease over time and the blue and orange dots indicate years above and below the long-term mean respectively.

In seasonal environments offspring size variation within each cohort can be large. In the pike population in Windermere in northern England, for example, the offspring at age 1 typically have a length between 15 and 25 cm. However, the observed length interval at this age (often quantified in terms of its variance) changes between years and has in general decreased over time (Figure 1) – in other words, offspring are becoming more similar in size. A similar decrease in offspring size variation has been observed in cod (Olsen et al. 2009). We do not know the causes of this decrease, but whatever they are, another important question is: How could this decrease in offspring size variation affect the population dynamics?

Hence, a possible consequence of a further decrease in offspring size variation in pike and cod could more variable population dynamics.