UiO The Faculty of Mathematics and Natural Sciences CEES - Centre for Ecological and Evolutionary Synthesis
Main navigation
Back to uio.no
Sub navigation Menu
Outreach > Blogs > Marine Science blog > Large-scale effects of temperature and zooplankton on phytoplankton in the North Atlantic

Phytoplankton biomass is controlled by a combination of “bottom-up” factors such as temperature, light and nutrients and “top-down” factors, in particular zooplankton predation. In a recent study we analysed large-scale data on ocean chlorophyll, copepod abundance and temperature in order to assess the general importance of bottom-up and top-down factors in controlling phytoplankton biomass. 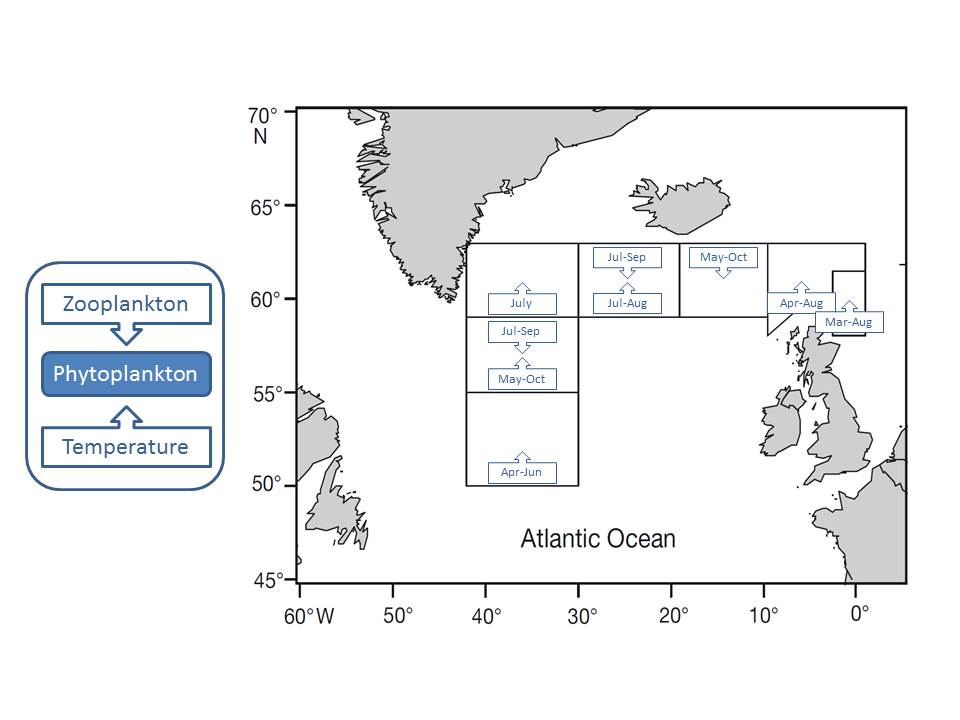 Textbooks in marine biology will typically tell you that phytoplankton are primarily determined by "bottom-up" control, i.e., that phytoplankton are mainly limited by access to light and nutrients. For instance, Harald Sverdrup's Critical Depth Hypothesis from 1953 is typically viewed as a hypothesis grounded in such a "bottom-up" view. However, recently some researchers have called out for abandoning Sverdrup's hypothesis, suggesting an alternative hypothesis, the Dilution–Recoupling Hypothesis. This alternative hypothesis basically says that the phytoplankton biomass mainly varies depending on the balance between phytoplankton growth and zooplankton feeding on phytoplankton, i.e., a form of "top-down" control. In a recent study we analysed large-scale data on ocean chlorophyll, copepod abundance and temperature in order to assess whether the variation in phytoplankton biomass is consistent with bottom-up control, top-down control, or a combination of the two.

Positive correlations between temperature and chlorophyll prevailed in spring and summer over large parts of the North Atlantic. These positive correlations suggest direct or indirect bottom-up effects of temperature on phytoplankton biomass. Temperature influences phytoplankton growth directly, but is probably more important as a proxy of other factors, in particular stabilization of the water column. The core of Sverdrup's "critical depth theory" is that the phytoplankton bloom in spring starts when the upper water masses have become so stable that the phytoplankton spend enough time in the upper layers where there is enough light for biomass production.

Nevertheless, we found negative correlations between the abundance of copepod nauplii and chlorophyll in summer and autumn in central parts of the North Atlantic. These negative correlations suggest that phytoplankton biomass is controlled by top-down effects of predation later in the season. This does not rule out bottom-up effects, as phytoplankton generally suffer nutrient limitation at this time, which may allow top-down control to occur: High predation under such conditions is likely to be lead to a more rapid decline in phytoplankton biomass.

Our results thus demonstrate that physical (bottom-up) and zooplankton (top-down) effects alternate to shape the seasonal dynamics of phytoplankton in the North Atlantic. Thus, we are not quite yet ready to completely scrap the Critical Depth Hypothesis (or more recent refinements of it, such as the "critical turbulence hypothesis"). It is also worth noting that Sverdup already in 1953 wrote that "conclusions may be greatly modified if grazers are present", so obviously Sverdrup himself did not rule out top-down control completely.