Can we use economic information to anticipate a fishery collapse?

This paper investigates the scope for resilience indicators to predict an upcoming stock collapse. We find that economic information, such as profits, may complement biological information when assessing the state of fisheries. 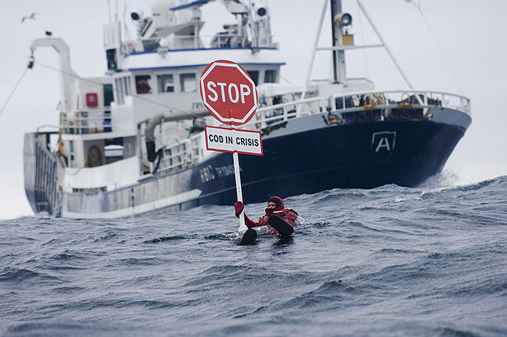 A fishery has a natural propensity to regenerate and is therefore a prime example of a renewable resource. However, this does not imply that it is an inexhaustible resource. Overexploitation may push biomass levels below safe limits, eroding the viability of the whole population. The most visible example is probably the collapse of the Canadian cod fishery in 1992, which was also a socioeconomic tragedy: about 30,000 fishermen have lost their jobs. 23 years later there are still no signs of recovery, suggesting that the collapse has been irreversible. What did we learn? Can we make sure that these kind of tragedies will not happen again?

Unfortunately, preventing a crisis, as it unfolded along the coast of Newfoundland, is hindered by two main factors. First, typically overexploitation is not the only stressor that is imposed on a fish stock. Instead, diverse driving forces, such as climatic changes, but also technological changes, or population growth may “push us past environmental thresholds before we know it” (Ostrom et al. 1999). Second, a population collapse is usually coming as a surprise and often irreversible, which is – if you think about it – a really bad combination. If you fly in a mountainous area with a plane, you need to i) either take strong precautionary measures (i.e. fly at a very high altitude), ii) or have very good instruments guiding you. If both are lacking, disaster will strike eventually. In fisheries, precautionary measures are typically constrained by fisheries policy, and good instruments are constrained by scientific knowledge. A useful addition to the set of instruments are the so-called resilience indicators (Dakos et al. 2015). These are statistical patterns, such as autocorrelation to assess how close we are to tipping points that may trigger a regime shift. The main practical problem arises that resilience indicators typically require long time series. However, fisheries with long time-series, and good stock assessments are often also relatively well managed – they are not necessarily the ones that are in trouble. So what can we say about the state of a fishery in the absence of biological data?

The key idea that we investigate in this paper (Richter Dakos 2015) is to assess whether one can use economic information, such as fisheries profits, to infer the state of the biological system. We build a generic stochastic bioeconomic model with a population featuring a minimum viable population size below which collapse occurs. In the first setting, there is simply unregulated open access. Changing key parameters, such as harvesting efficiency, number of resource users, or carrying capacity leads eventually to a collapse. Our first result is that an upcoming ecological collapse can be anticipated by investigating autocorrelation of profits (see Figure 2). This is somewhat surprising, as profits by itself provide little information about the state of the system.

One of the peculiarities about marine systems is that they are complex adaptive systems. It may occur that in the vicinity of a resource collapse, at least some resource users change their behavior as an attempt to stabilize the ecosystem. We take this into consideration by using a community governance model that we published earlier (Richter et al. 2013). In this model, cooperative harvesting norms prescribe to reduce exploitation if biomass drops below some mutually agreed target. Social norms spread through social interactions, while the temptation to make higher profits make people act selfishly. In the end, the properties of the systems were such that the recovery attempts will not be successful, and the resource collapses after all*. Our second result is that this form of adaptive behavior of resource users may actually mask an upcoming collapse. Comparing Figure 3 with the previous Figure signals a drop in autocorrelation – precisely at the point where cooperative individuals start stabilizing the system. From the outside, one may falsely conclude that the whole system is stabilizing, while in reality cooperators are taking action because the resource is overexploited.

How does it work? Why we can infer a biological collapse from economic data? The main reason is that marine systems are coupled social-ecological systems, where information flows from one part of the system to the other. In particular, profits depend on biomass levels in the oceans, as lower biomass levels imply higher search costs. To investigate how the coupling of our system affects our results, we also look at the case where a system is only weakly coupled and profits are largely independent of biomass in the ocean. Figure 4 compares profits of selfish individuals – called defectors – (red line) with profits of cooperators (green line) and biomass (blue line) for a system that is strongly and weakly coupled. A strong coupling implies that fluctuations in the resource are propagated to income dynamics retaining all relevant features of the imminent transition. When the system is weakly coupled, income dynamics do not fully reflect the approach to the tipping point. Thus, in a weakly coupled socio-ecological system, identifying upcoming transitions from profit fluctuations is still possible, but limited.

We believe that the conclusions of this study may open new perspectives and search images for the anticipation and management of tipping points in social-ecological systems. This is especially the case for applications in fisheries, where catch and effort data are increasingly used to complement biological stock assessments, and the informational value of those data alone is controversially debated. For such systems, it may be worthwhile to explore whether patterns in economic information, be it trade flows, commodity prices, energy consumption, or fisheries profits, might reflect the social-ecological resilience of such systems and the likelihood of approaching a critical transition in the ecological part of these systems.

*The nice thing about theoretical modelling is that one can do things that were just too cruel in reality. In my computer I simulated thousands of stock collapses, and no single animal or human got hurt.