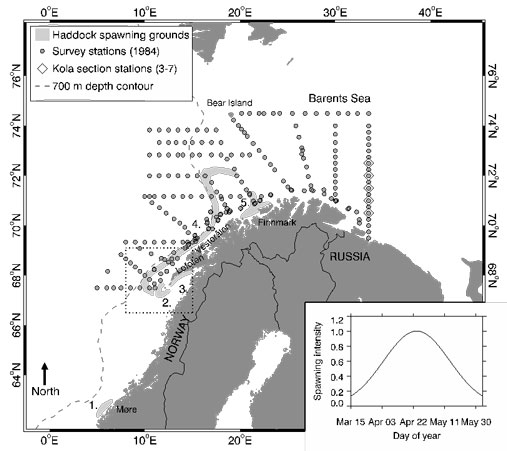 Figure 1. shows an overview of the study area. The assumed spawning intensity within season is shown in the lower right corner. The dotted box indicates the area shown in figure 2.

Many fish species migrate to distinct areas to spawn. This is the case both for cod (Gadus morhua, in Norwegian: torsk) and the haddock (Melanogrammus aeglefinus, in Norwegian: hyse). In particular, the stocks of cod and haddock in the Barents Sea migrate to spawning locations outside the coast of Norway, from Finnmark in the north to Møre in the south. For cod, it is well known that the spawning intensity shifts geographically over time. Exactly what drives these shifts are not fully understood, but climate and fishing are the two main candidates for explaining the observed shifts over time. For haddock, the temporal variability in geographical location of the spawning has been less well studied. We have recently investigated the temporal variations in the geographical distribution of spawning intensity in the haddock stock that migrates to the coast of Norway and more of shore areas to spawn (Figure 1). Haddock spawns at relatively deep waters (50-600 m depth) and the eggs are pelagic, i.e., they float in the water with the currents. By combining data from a Soviet-Russian egg survey (Figure 1) conducted over a 35-year period (1959-1993) with numerical simulations of the ocean currents to model how the haddock eggs spread out in the water (see Figure 2 for example), we estimated the median latitude of spawning for haddock for each year between 1959-1993.

Based on this estimation, we conclude that the geographical location of haddock spawning has been significantly changing over time, similar to observations for the cod in the same area. In addition, we also wanted to investigate which factors could be behind the observed changes. Since fishing and temperature had been suggested as potential drivers of the change in cod spawning, we tested for proxies associated with temperature and harvesting. In addition, we tested for density dependent effects. The statistical analysis indicated no association between the haddock spawning and the temperature and fishing proxies. However, we found evidence for association between spawning stock size and spawning location. We believe that this may be due to effects that act mainly on the feeding grounds in the Barents Sea. When there are high numbers of haddock inside the Barents Sea, they tend to expand and use more of the area to hunt for food. In the consecutive spring, the mature haddock migrates to the suitable spawning grounds (Figure 1) and the distribution on the spawning grounds may be a reflection of the distribution at the feeding grounds.