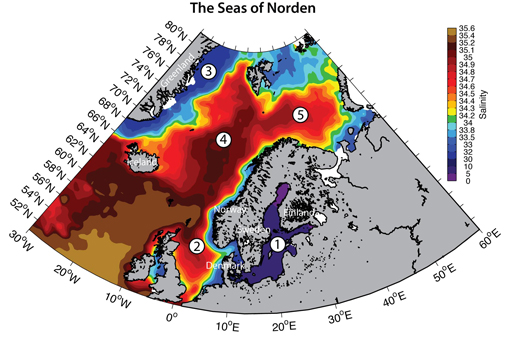 Figure 1. The mean surface salinity in Northern Europe for the period between 1950-2010. Large gradients can be observed both in an E-W and N-S direction. 1, Baltic Sea; 2, North Sea; 3, Greenland Sea; 4, Norwegian Sea; 5, Barents Sea. Salinity data comes from the Norwegian Iceland Seas Experiment (NISE) and the International Council for the Exploration of the Seas (ICES). Courtesy of Kjetil Våge (University of Bergen).

In a commentary paper published this week (28. January) in Nature Climate Change, we address the question of multi- and trans-disciplinary science and the way to reach it. There are two main challenges to multidisciplinary science. The first is finding a common scientific ground or question and the second finding a funding source (the second coming often with the first).

One challenge that have unified sciences in the recent years is climate warming leading to interdisciplinary activities such as the one of IPCC. The northern high-latitude seas and their coastal waters are among the most sensitive to climate change on Earth. Salinity, temperature and oxygen gradients steepen, wind patterns drift, and the rapid rise of atmospheric CO2 concentration will continue to acidify the ocean. The critical question for scientists across all disciplines is how the combination of all these stressors will impact the waters’ interdependent ecosystems as well as the social systems within this region.

The Seas of Norden as a common play ground

In 1980 the Norwegian oceanographer Johan Blindheim assembled the Baltic, North, Greenland, Norwegian and Barents Seas under the name of the Seas of Norden. In our paper, we argue that the Seas of Norden being interconnected are a perfect global testbed for innovative approaches.

The Seas of Norden are not only connected through biophysical and biological interactions, but also through scientific networks and political dynamics, affecting the regional inhabitants, and people across much of the Northern Hemisphere. They include some of the ecologically richest, most diverse and best understood water masses on the planet, the coasts, to which these waters border, being the home to more than 100 million inhabitants. These seas were and are extensively studies and data collected over many years. This data richness, collected through periods of marked environmental and ecological fluctuations, can provide us with a rare advantage when it comes to exploring long-term effects of climate change and the influence of humans on the ocean.

To use the conclusion of the paper: “Recognizing that the Seas of Norden are interconnected, not only to each other, but also that they are closely linked to human well-being and health, are critical steps in creating a roadmap from science to policy towards the common goal, sustainability. However, developing this roadmap requires that the scientific community shakes off its inherent conservatism and embraces collaboration across disciplines and borders.”

Working on a common playground, internationally recognized for its general importance, will certainly help to promote ecological studies. At least one can hope…