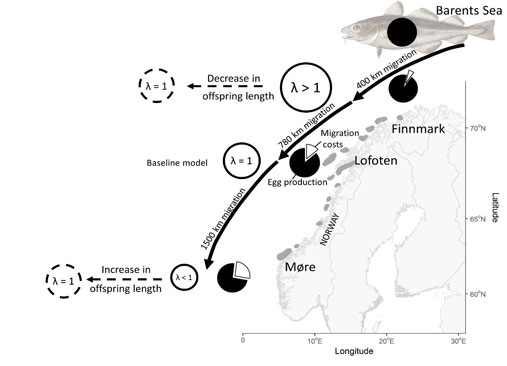 Figure 1. Schematic overview of the model. The right side of the figure shows the spawning grounds of Northeast Arctic (NEA) cod (grey shaded area) along the Norwegian coast. Black slice in the pie charts: amount of energy available for reproduction (thus egg numbers) at the respective spawning grounds (maximum amount if spawning would occur in the Barents Sea; full black circle);white slices: migration costs (calculated for a 100 cm large female). With an increase in migration distance, λ declines from λ > 1 to λ < 1 at the spawning grounds south of Lofoten. In order to maintain a stable population with λ = 1we increase or decrease the mean offspring length

The Northeast Arctic (NEA) cod (Gadus morhua), also called Barents Sea cod, is currently one of the most productive cod stocks in the world and is a stock with high historical and commercial value especially for Norway and Russia, but also many other countries. This stock undertakes extensive spawning migration from its feeding ground North of Norway in the Barents Sea to its spawning grounds all along the Norwegian Coast. It can migrate from several 100s km to more than 1000 km (Figure 1). The parents invest a lot of energy to reach the spawning grounds, thus some sort of benefit must counterbalance the costs. Several studies indicated that increased early offspring survival in southern spawning grounds can counterbalance those costs (Jørgensen et al. 2008, Opdal et al. 2011). However, due to the large variability of the survival of pelagic life stages, Langangen et al (Langangen et al. 2016) suggested that increased offspring size due to warmer temperatures in the southern spawning grounds compared to spawning at the northern grounds, might be more likely to be the main benefit of this spawning migration.

We tested in our study (Färber et al. 2018) if an increased offspring length can counterbalance the parental migration. Using an integral projection model, which uses a continuous-state variable, such as length of the fish determining their vital rates, such as survival, growth, fecundity and offspring length we were able to quantify the amount of offspring length increase in order to compensate parental migration costs. Our model is female-based, thus the invested energy by a migrating adult cod led in our model to a reduction of the potential number of eggs. This reduction led to a reduction in the fitness of the population (measured as λ) with increasing migration distance (Figure 1, 2). By increasing the mean offspring length in southern spawning grounds, we are able to compensate for this loss in offspring numbers (Figure 1,2).

We find that already an increase in offspring length by 12.5 % could compensate for the additional energy spent on a migration to Møre instead of Lofoten (Figure 2). This result lies well within the estimated growth benefit suggested by drift models of early life stages of cod (Langangen et al. 2016). This offspring growth benefit in southern spawning grounds, will lead to increased survival and fecundity later in life and leads to long-term population effects. Our results of the study highlight the potential importance of offspring growth as another factor explaining the benefit of long-distance migration, broadening our knowledge on spawning migration. However, the fishery of NEA cod is mainly conducted near and on the spawning grounds, thus long-term latitudinal changes in the spawning ground distribution due to e.g. climate change (Sundby & Nakken 2008) may significantly alter the impact of harvesting on the population. Thus, our study provides guidance where efforts should be made in the management of fisheries at the spawning grounds.