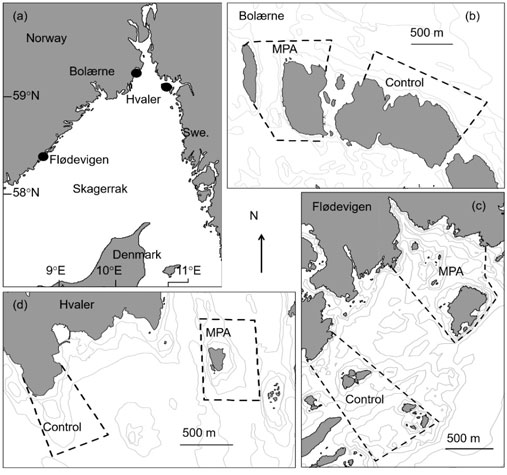 On September 2006, three Marine Protected Areas (MPAs) were implemented along the Skagerrak coast, in southern Norway (fig. 1), to give full protection to European lobster (Homarus gammarus), a large decapod crustacean of both ecological and socio-economic importance that has been in continuous decline in Norway for the last 60 years. To evaluate the effectiveness of MPAs as a management tool for lobster populations, a capture-recapture monitoring program was initiated in 2004 (2 years before MPA establishment) by sampling and tagging individuals every year (Fig. 2) both within these MPAs and in neighbouring fished sites (control areas), thus allowing for a Before-After-Control-Impact (BACI) study on lobster’s local population development.

Knowledge gaps on lobster demography and the effects of MPAs

Previous research on European lobster in Skagerrak had already reported MPA effects on local populations via an increased CPUE (Catch-per-unit effort, a proxy of abundance) at the MPA sites a few years after protection (Moland et al. 2013a). However, proper annual abundance estimates (corrected by imperfect detection) both inside and outside the MPAs were still lacking, thus favouring speculation about the benefits of MPAs and their suitability as a management tool for lobster in Norway. Moreover, a study carried out in a Swedish MPA was, until recently, the only reference providing reliable survival estimates for protected lobster in Scandinavia (Moland et al. 2013b). Here, we provided, for the first time, unbiased annual abundance and survival estimates for different classes of individuals across multiple years and coastal sites, thus filling key knowledge gaps on both lobster’s life history traits and MPA effects (Fernández-Chacón et al. 2021).

Survival of lobster under different forms of management

The modelling of the field data using multi-event models, a type of Hidden-Markov capture-recapture model (Pradel 2005), revealed that sex and body size were both important factors determining the annual survival of lobster at all sites. Female survival was consistently higher than male survival, no matter the context, a finding also reported by previous research (Moland et al. 2013b) and confirming this pattern for the species. Comparison of mean annual survival estimates between MPA and Control areas (Fig. 3) indicated that smaller individuals fared better than larger ones at the fished sites, whereas MPAs strongly benefited the survival of large-sized individuals, with that of large males increasing as much as by 125% after protection. This increase in survival of large-sized lobsters (targeted by fishers elsewhere) suggests that local protection from harvesting is indeed effective.

Annual population size estimates obtained by means of Robust Design models (Pollock 1982) showed increases in lobster abundance at the MPAs after protection, but a comparison between study sites revealed geographic differences in population development over time (Fig. 4). In the larger MPAs (Flødevigen and Bolærne) annual abundance estimates reached the highest values and showed signs of being still increasing >10 years after protection. On the other hand, annual abundance values in the smallest MPA (Hvaler) were not significantly different from those obtained in the corresponding control area. This suggests that lobster population growth could be limited by lack of available habitat within MPA borders, despite improvements in local survival.

We found that MPAs could benefit European lobster demography by improving the annual survival rates of the species, and especially those of large-sized individuals. This survival benefit is usually accompanied by a local increase in lobster abundance, but habitat constraints may keep population size low, as shown by the limited growth of the lobster population within the smallest MPA. Together, these findings can assist future management actions and improve the design of future lobster MPAs.