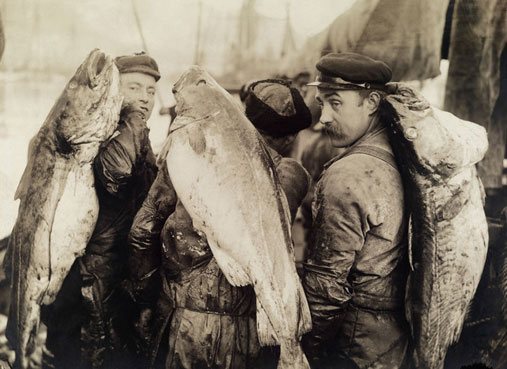 Figure 1. Many old and large fish in the population can make it more robust to detrimental effects of oil spills. The photograph shows 1 m long cod slung across the backs of cod fishermen, February 1915. Photograph by A. B. Wiltse, National Geographic (source: Wikimedia Commons).

There are at least two reasons why fish populations with few old and large fish are likely to be particularly sensitive to oil spills. First, the mature part of such a population is typically dominated by one or only a few age classes. The population then depends on a fresh supply of new recruits each year to maintain high production of new recruits. If an oil spill kills a substantial part of the recruits a year, the reproductive capacity of the population can be substantially impaired for several years. In comparison, a population with many age classes in the mature part of the population is more robust to loss of a year-class of recruits. Even if an oil spill should kill many fish eggs or fish larvae − the life stages most sensitive to oil, the population may recover relatively fast because its reproductive capacity will not become seriously impaired. This effect of demographic structure on sensitivity to oil spills is relatively easy to capture in oil spill simulations because of good data availability and a straight-forward mechanism (see, e.g., Ohlberger and Langangen 2015 – see blog post here, and Carroll et al. 2018).

The second reason is more easily overlooked and has generally been ignored in oil spill assessments because of lack of quantitative knowledge. This mechanism is linked to the spatial and temporal distribution of fish eggs. A population that includes a substantial proportion of old and large fish will likely use more diverse spawning strategies than a population with only young and small spawners. Large fish may, for example, reach spawning grounds that are inaccessible for small fish, and with both small and large fish in the population, a wide range of spawning areas can be used. By using a wide range of spawning areas, the fish eggs and fish larvae are likely to have a wide spatial distribution. An oil spill of a given spatial extent, smaller than the distribution area of the fish eggs and fish larvae, can then in a worst-case scenario hit a smaller proportion of the eggs or larvae than it could if the eggs or larvae were concentrated in a smaller area. The worst case effect of oil spills is therefore largest in the latter case, with the concentrated spatial egg distribution expected when the old and large fish are gone.

The quantitative role of this second mechanism has now been estimated for the world’s largest population of Atlantic cod – the Barents Sea cod. This cod stock spawns along the coasts of Norway and Russia and feeds in the Barents Sea, a continental sea to the north of Scandinavia and northwest Russia. The importance of this cod population for Norway is illustrated by the fact that in the Norwegian language, the Barents Sea cod is called “skrei” and all other cod “torsk”. Incidentally, herring has a similar iconic value, and on parts of the west coast, one traditionally talked about herring (“sild”) and fish (“fisk”) as two different things. As oil activities are planned near the main spawning and larval drift areas of these cod and herring populations, there is considerable concern about and research on what effect possible oil spills might have on these fish populations.

Specifically, statistical analysis of long-term survey data on the spatial distributions of Barents Sea cod eggs over a 35-year period has shown that the eggs are distributed over a larger area in years with high mean weight or age of spawners (Stige et al. 2017 – see blog post here). This is exactly as we would expect from the hypothesis that populations with many old and large fish in the mature part of the population can use more diverse spawning strategies. In a recent paper (Stige et al. 2018) we have assessed consequences for worst-case effects of oil spills. We quantified worst-case effects by first identifying the areas with highest concentrations of cod eggs, and then calculating how large fraction of a year-class would overlap with oil if the oil spill were to hit these areas. We find that for realistic areal extents of oil spills, the maximal overlap between oil and fish eggs in a worst-case scenario is about 1.5 times higher for the egg distribution expected at the historically lowest mean spawner weight compared to for the long-term average spawner weight. These results can be used to correct for possible future demographic changes in a fish stock, when calculating worst-case effects of oil spills.

The mean age and size of spawners of Barents Sea cod declined dramatically from the 1940s to the 1990s, concomitant with high fishing pressure and declining fish biomass. In recent decades, however, a combination of favourable climate conditions and good management has rebuilt the population so that the biomass is high and the demographic structure is returning towards its historic state. This is good news for the robustness of the population, both towards future fishing and possible oil spills.