The toxicity resulting from exposure to oil droplets in marine fish embryos and larvae is still subject for debate while at the same time worldwide energy demands have resulted in increased hydrocarbon extraction activity. 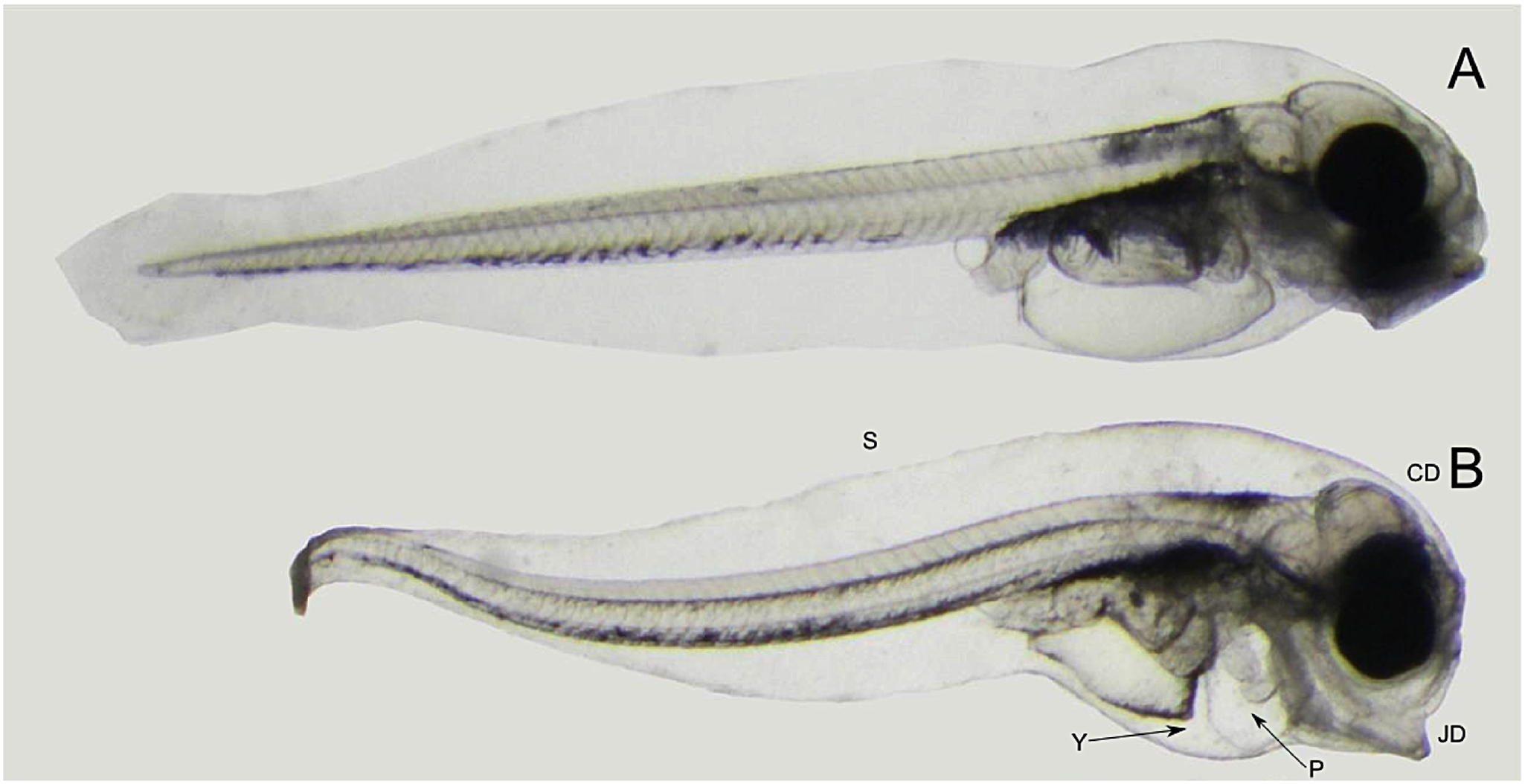 In a previous post we expressed our interest in the effect of oil spill on young ages of fish and studied this at the population level. In the present post we put our attention on the toxicity of oil at the embryos stage as illustrated by the study of Sørhus et al. (published in PLoS One this May 2015).

Although exposure to dissolved petroleum compounds alone is sufficient to cause the characteristic developmental toxicity of crude oil, few studies have addressed whether physical interaction with oil micro-droplets are a relevant exposure pathway for open water marine species. In their study Sørhus et al. used controlled delivery of mechanically dispersed crude oil to expose pelagic embryos and larvae of a marine teleost, the Atlantic haddock (Melanogrammus aeglefinus).

A spawning grounds overlapping the major oil fields in Norway

The Atlantic haddock is a teleost belonging to the Gadidae family, and is a commercially important marine fish distributed on both sides of the North Atlantic. In Norway, its distribution is very similar to the more iconic Northeast Arctic (NEA) cod Gadus morhua and named Northeast Arctic haddock. Spawning occurs at depths of 30–500 m or even deeper and the fertilized eggs rise to the surface where they are subject to transport by water currents. The haddock eggs have high buoyancy, thus the majority of eggs are found in the upper 20 m in the water column.

The major undertaking of Sørhus’ study was to obtain more realistic toxicity data on early life stages of NEA haddock exposed to an oil dispersion containing a combination of water-dissolved components of crude oil in water accommodated fractions (WAFs) and oil micro-droplets. Haddock embryos were exposed continuously to two different concentrations of dispersed crude oil, high and low, or in pulses. By 24 hours of exposure, micro-droplets of oil were observed adhering and accumulating on the chorion, accompanied by highly elevated levels of cyp1a, a biomarker for exposure to aromatic hydrocarbons. Embryos from all treatment groups showed abnormalities representative of crude oil cardiotoxicity at hatch (5 days of exposure), such as pericardial and yolk sac oedema. Assessment parameters were accomplished by fitness measurements (survival and growth) and recording phenotypic and histological abnormalities as well as examining the expression of genes involved in the detoxification pathway, especially cyp1a.

The originality of the study is thus the merging of information going from histology component to phenotypic one and gene expression.

The major finding from this study is amplified embryotoxicity observed in NEA haddock compared to similar species (e.g., NEA cod) when exposed to dispersed crude oil during early developmental stages. Compared to other species, the frequency and severity of toxic effects was higher than expected for the waterborne polyaromatic hydrocarbon  (PAH) concentrations (e.g., 100% of larvae had oedema at the low treatment). These findings suggest an enhanced tissue uptake of PAHs and/or other petroleum compounds from attached oil droplets. These studies highlight a novel property of haddock embryos that leads to greater than expected impact from dispersed crude oil.

This study indicates that haddock embryos are highly impacted by oil exposure when using a realistic oil exposure system that includes dispersed oil droplets in addition to the water accommodated fraction. The haddock embryo is known to have an adherent chorion, which seems to attract micro-droplets of oil, creating a direct connection between the toxic components of the dispersed crude oil and the embryo, and thereby enhancing the exposure. Given the very limited number of marine species tested in similar exposures, the likelihood of other species with similar properties could be high. Observations and data obtained in this study therefore emphasize the overall importance of also considering the toxicity of the oil droplet in the risk assessment.