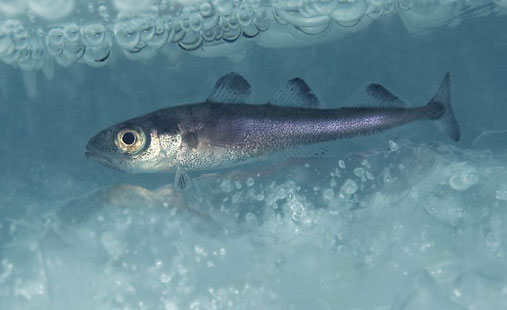 In the northern Barents Sea, environmental changes in the form of increased bottom temperature, decrease sea ice cover, changes in zooplankton population and increase in abundance of large piscivorous fishes such as Atlantic cod (Gadus morhua) is a concern for the survival of endemic Arctic fish species such as polar cod (Boreogadus saida) (Fossheim et al. 2015, Frainer et al. 2017, Stige et al. 2019). Polar cod is a key Arctic forage fish in the Arctic food web, and reduction of the stock as a response to a warmer climate may alter the transfer of energy to Arctic top predators such as sea birds, seals or polar bear. However, knowledge on the environment relationships with the population dynamics of Arctic marine species is still lacking in order to assess the effect of global change on Arctic species. In a recent study published in Marine Ecology Progress Series (Dupont et al. 2021), we were therefore interested in which environmental factors i.e. sea-ice, sea temperature, prey condition or predation condition are the most likely to influence the population dynamic of the polar cod stock in the Barents Sea?

To answer this question, we developed a Bayesian state-space model of population dynamics of polar cod based on 30 years of survey data, in order to quantify the effects of abiotic factors (sea-ice and sea temperature), prey biomass indexes and predation index on the abundance of age groups 0 to 4. We also quantified the strength of density dependent effect between consecutive age groups. In a second exercise, we used the estimated environmental covariate effects on the survival of polar cod to compare the predicted stock of polar cod using observed environmental values i.e. “null scenario” against hindcast prediction in different environmental scenarios reflecting the current environmental changes observed in the Barents Sea: 1) a cold scenario with high sea-ice and low temperature, 2) a warm scenario with low ice and high temperature, 3) low predation scenario and 4) a high predation scenario.

Sea-ice may affect survival of young age group by reducing the refuge area against predators in the case of age 1 as well as reducing the availability of spawning grounds for age 0 as previously suggested in the Barents Sea (Huserbråten et al. 2019). Bottom temperature only positively affected age group 1 and suggested a positive effect of temperature on survival that could be explain by a higher metabolism and better swimming speed (Laurel et al. 2016, Koenker et al. 2018) to escape predators or/and a better availability of potential preys coming from boreal areas of the Barents Sea (Loeng & Gjøsæter 1990). Predation effect on older age groups was expected as harp seal and cod are considered the main predator species on polar cod in the Barents Sea (Ajiad et al. 2011). The effect was only strong on older age groups; however predation on younger age group may be exerted by other predators that were not included in this study.

Nevertheless, the effect of predation at the population level were weaker than effect of sea ice and temperature. Our study suggest that the stock of polar cod is resilient to current changes in predator community compared to the ongoing warming of the Barents Sea.