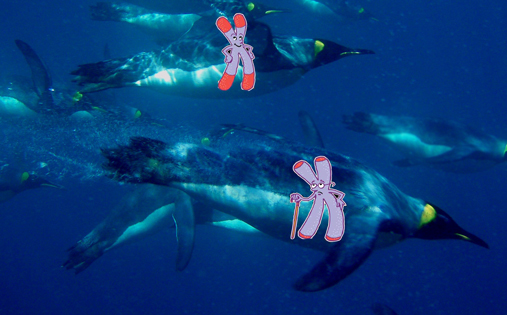 Why and how cells are dying is one of the main questions in science in the last 50 years. Elizabeth Blackburn and Jack Szostak (Nobel prize in 2009) discovered that a unique DNA sequence in the telomeres protects the chromosomes from degradation. Telomeres are non-coding, highly conserved, DNA sequences that cap and protect the genetic integrity of eukaryotic chromosomes. Those sequences shorten progressively through successive DNA replication cycles. The telomerase enzyme makes and replaces short bits of telomere DNA. When telomeres reach a critical length causing chromosome instability, cell senescence and ultimately cell death. Conversely, if telomerase activity is high, telomere length is maintained, and cellular senescence is delayed. A question remain for biologists, is the telomere length an indication of the organism quality?

Using 50 adult king penguins of known age (5–9 years old) they found that birds with longer telomeres arrived earlier in the colony to breed, tended to have higher breeding success, and that their chicks survived longer than individuals with shorter telomeres (that had longer breeding duration), suggesting a link between telomere length and fitness proxies. In other words they were of higher quality as confirmed by the positive relationship between relative telomere length and natural antibody levels.

As expected some works were published for long live fishes. For instance Carney Almroth et al. (2012) studied the male-female differences of health and aging process in North Atlantic cod Gadus morhua. They investigated evolutionary life history of cod and found gender differences in ageing patterns. While males cod have on average longer telomeres than females (Figure 3) they showed signs of physiological ageing and a reduction in telomere length (female telomere length remaining constant during their whole life). By comparing the extensively fished sites of Kattegat and Skagerrak to the protected area of Öresund (protected from trawling since 1932) they also found site differences among males, males from the heavily fished population were ageing prematurely.

There is still a lot to do for example Le Vaillant et al. (2015) suggest to investigate the links between telomere length and other important components of fitness, such as foraging performances. One can also wonder if external factors (such as density-dependence, harvesting, climate change) may affect telomere length and the individual’s quality. These will help understanding how telomeres relate to differences in individual quality within a population. Finally, telomeric DNA may be used as a biomarker for age which could be a good alternative to otolith technics since it can be assayed from tissue samples taken as biopsies from living animals (Ovenden et al. 2015).