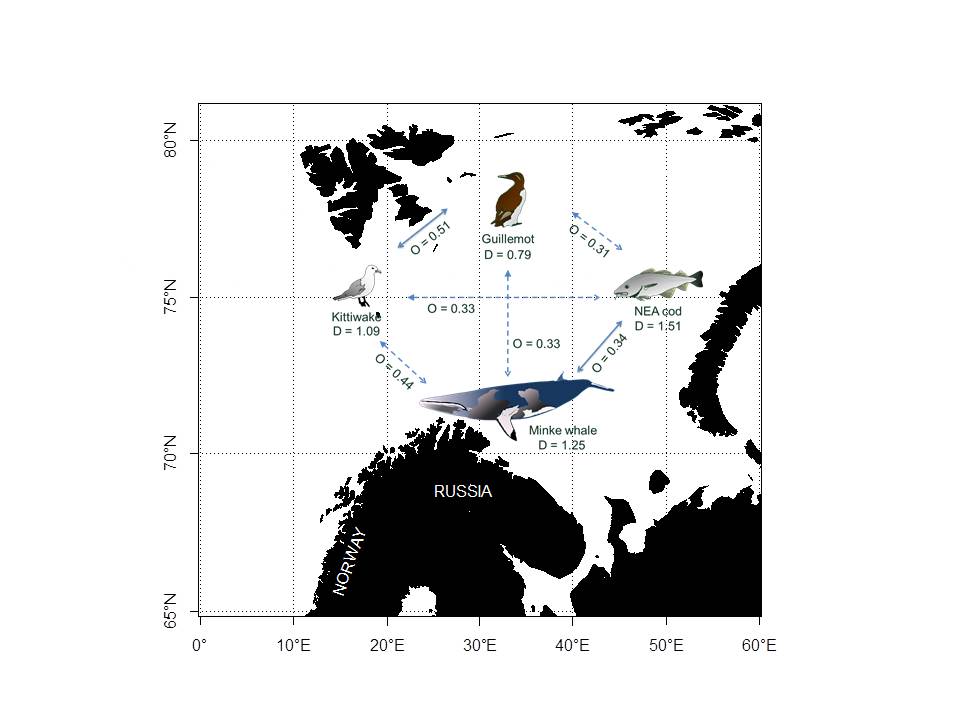 Trophic relationship between some predators of the Barents Sea

The Barents Sea is a high-latitude shallow sea situated to the north of Norway and Russia that supports a productive ecosystem. The Barents Sea ecosystem consists of several thousand species including about 200 fish species and has experienced extensive changes over the last decades. This highly productive ecosystem has been affected by human activity for several hundred years, mainly through fishing and hunting and more recently by climate warming. The Barents Sea system is often depicted as a simple food web in terms of number of dominant feeding links. The most conspicuous feeding link is between the Northeast Arctic cod Gadus morhua, the world’s largest cod stock which is presently at a historical high level, and capelin Mallotus villosus. The system also holds diverse seabird and marine mammal communities. Previous diet studies may suggest that these top predators (cod, bird and sea mammals) compete for food particularly with respect to pelagic fish such as capelin and juvenile herring (Clupea harengus), and krill. In this paper we explored the diet of some Barents Sea top predators (cod, Black-legged kittiwake Rissa tridactyla, Common guillemot Uria aalge, and Minke whale Balaenoptera acutorostrata). All theses predators may interact (for example compete) for the prey they are feeding on (capelin, herring, polar cod, krill…).

In our paper published in November 2014 by PLoS-one we explored the diet of some Barents Sea top predators for which diet time series were available to us (i.e., cod, black-legged kittiwake, common guillemot, and minke whale). By using, as statistical modelling technique, GAM models we were able to describe the change of diet over time and explore the possible factor (climate or prey abundance) affecting these changes. The diet was described by two indices. The first the Shannon-Wiener index D is giving the niche breadth of each predator (the higher the value the more species are found in the diet) while the second, the Schoener’s index O, is giving the proportion of similarity (ranging form 0 no similitude to 1 identic diet) between the diet of two predators. Our results demonstrated that the seabird diet is temperature dependent while the diet of Minke whale and cod is prey dependent. Minke whale and cod diets depend on the abundance of herring and capelin, respectively. Among the predators, only cod and minke whales, and kittiwakes and guillemots show any significant overlap in diet and thus could be competitors for food. In general, the diet overlap between predators increased with changes in herring and krill abundances.

This study fills a gap in the knowledge of the otherwise well-studied ecosystem of the Barents Sea. The diet overlap models we developed may also help to identify inter-specific interactions and their dynamics that potentially affect the stocks targeted by fisheries.