The hand of Code: Developmental transcriptomics in haddock

The development of haddock embryos is highly impacted by oil exposure as discussed in a previous post. In a new study Sørhus et al. explored the link between transcriptional changes and developmental processes such as pattern formation and organogenesis. The question is to understand the abnormal development in fish. 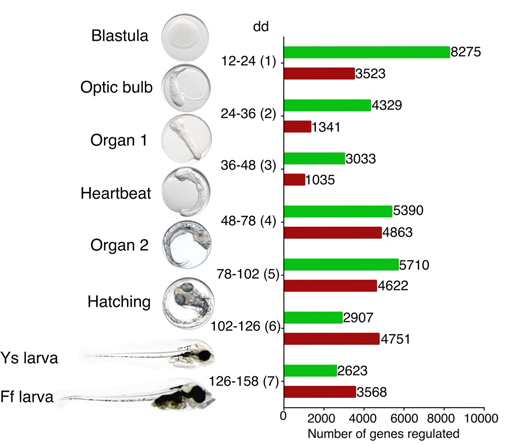 Few studies have detailed the transcriptomes (messenger RNA molecules) of developing vertebrates using deep sequencing, in particular with a focus on organogenesis, and none in a non-model species. In their study, Sørhus et al. (in a study recently published in Developmental Biology) have used deep-sequencing approaches to understanding the early life history of a non-model organism fish in order to better predict the effects of a changing environment and increased human activities. The originality of the study is that they have complemented their “shotgun approach” to obtain temporal gene expression patterns by bioinformatics analysis. The technique used makes possible to reproduce results obtain for model species (e.g., Zebrafish) confirming the robustness of their approach.

A commercial fish spawning in a risky place

Sørhus et al. (2016) have chosen to conduct their analysis on Atlantic haddock Melanogrammus aeglefinus. This Gadoid fish is a commercially important fish distributed throughout the North Atlantic. The combined annual landing for North America and Northern Europe is reported to be ca 130,000 tonnes (ca $200,000,000) within the last decade. In Norway, the areas surrounding Lofoten and Vesterålen are considered to be the main spawning grounds for haddock, along with other fish species such as the Northeast Arctic cod Gadus morhua and the Norwegian spring spawning herring Clupea harengus. Proposals for petroleum extraction in these areas are controversial because of the deleterious impact this activity could have on spawning fish (Misund and Olsen, 2013), and we recently showed that haddock embryos are especially vulnerable to toxic effects of dispersed crude oil (Sorhus et al., 2015).

Clues to the development

For their study, Sørhus et al. have sequenced messenger RNAs for eight development stages (Fig. 1) from the blastula through first feeding larval stages. They showed that the temporal patterns of differentially expressed genes were tightly anchored to either the appearance of visible structures or cellular processes characterised in model organisms. By this they showed that detailed bioinformatics analysis could be used to identify major pathways for underlying pattern formation and organogenesis of the cardiovascular system and craniofacial skeleton.

At each developmental stage examined in haddock (Fig 1), the most highly expressed genes and pathways were clearly associated with processes occurring at those stages. Importantly, Sørhus et al. were able to link gene expression to either the appearance of visible structures (e.g., somitogenesis) or cellular processes characterised in model organisms (e.g., B lymphocytes development). These findings indicate the potential of developmental transcriptomics for pinpointing processes that are perturbed in malformed embryos, and understanding pathophysiological mechanisms leading to abnormal development. Thus a comparative transcriptomics approach, comparing normal and abnormal embryos, will likely reveal critical information relating to disruption of pathways leading to abnormal phenotypes. This may dramatically enhance the dissection of development in non-model organisms by rapidly identifying which genes should be targeted for more in-depth analysis by methods such as in situ hybridisation.