Open lecture: A Planet of Viruses

Carl Zimmer, the author of several popular science books, will talk about how the latest research has drastically changed our view of viruses 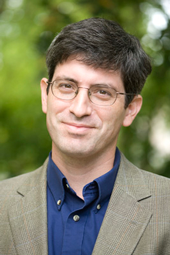 Carl Zimmer will give an open lecture about viruses at Litteraturhuset. Photo: Ben Stechschulte.

Our view of viruses has changed

Traditionally, viruses have been considered insignificant genetic fragments, not even worthy of being considered "alive". Our view of viruses has changed drastically, especially in the past few years. Thanks to advances in DNA sequencing technology, scientists can now collect viruses from many extreme environments, including miles underground and at the bottom of frozen lakes.

The most abundant life forms on Earth

Their research has revealed that viruses are by far the most abundant life forms on Earth. There are a million times more viruses on the planet than stars in the universe. Viruses also harbor the majority of genetic diversity on Earth. Scientists are finding evidence of viruses as a planetary force, influencing the global climate and geochemical cycles. They have also profoundly shaped the evolution of their hosts. The human genome, for example, contains 100,000 segments of virus DNA.

The power of viruses

The power and ubiquity of viruses opens up the possibility of using them in a wide range of applications–killing plague and other bacteria as an alternative to antibiotics, for example, or building nanotechnology structures.

Carl Zimmer is the author of 13 books, including A Planet of Viruses (University of Chicago 2011) and Evolution: Making Sense of Life (Roberts and Company 2012), co-authored with evolutionary biologist Douglas Emlen. Zimmer writes frequently for the New York Times and a number of magazines, and writes an award-winning blog about biology called The Loom.

All are welcome! No pre-registration, but seats are limited.