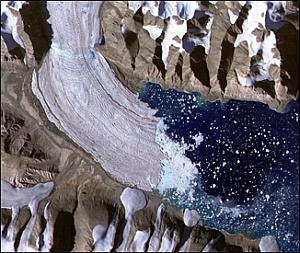 Figure: Glaciers on Ellesmere Island, Canadian Arctic; fast-flowing (several meters per day) and thus crevassed glaciers calve into the ocean. Very slow (few metres per year) and cold glaciers form piedmont lobes that hardly reach the sea. The main physical difference between glacier types are the basal processes at the ice/rock interface. Fast glaciers are sliding under high water pressure, while slow ones are frozen to their bed. The transition from the frozen to the fast-flow regimes are of major concern for ice mass loss.

Mass loss from glaciers represents the largest (65%) contribution to observed sea level rise. In addition to mass loss by melting, glacier dynamics can drastically increase ice discharge to the ocean. For instance, ablation of the Antarctic ice sheet is almost exclusively due to calving of fast flowing glaciers, similar to most of the spatio-temporal mass-balance pattern of Svalbard glaciers and the Greenland ice sheet.

Fast glacier flow is mainly accomplished by localised motion at the ice-solid interface (called basal motion), involving complex sliding and shearing processes in the presence of water under high pressure and varying thermal conditions at or below the pressure melting point. However, due to the virtual inaccessibility of the subglacial environment, the sliding mechanisms are poorly understood.

As such, glacial dynamics are, for instance, not completely accounted for in recent sea level projections from the IPCC. The core of the problem is to understand the complex spatio-temporal patterns and interactions at the interface between the moving glacier ice and the underlying bedrock or sediments. The response of the interface dynamics to external forcing, such as from surface melt water, is highly non-linear as it strongly depends on the mechanical and thermal interface conditions, which in turn have a memory of earlier states.

The aim of this project is to develop a novel thermo-dynamical model that describes the observed large spatio-temporal variability of fast glacier sliding, applying current theory of interface friction. The model will also exploit the similarities between processes occurring in natural faults/earthquake settings and the slip at the base of glaciers. 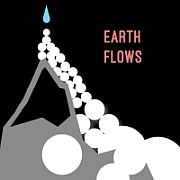