June 13-17, 2010 the Third European Conference on Permafrost (EUCOP III) took place in Longyearbyen, Svalbard, at the University Centre in Svalbard (UNIS). Several of the CRYOLINK participants organized and/or joined this conference, and several presentations related to the scientific results of the CRYOLINK project were given. Bernd Etzelmüller (UiO) gave an overview of modelling of mountain permafrost and seasonal frost in Norway and Iceland.

Herman Farbrot (UiO) presented the first results of air and ground temperature measurements in the CRYOLINK field areas. Tobias Hipp (UiO) presented models of past and future ground temperature evolution for some of these sites. Ketil Isaksen (met.no) reported on observed warming mountain permafrost in Southern Norway and its controlling factors. Thomas Vikhamar Schuler (UiO) was responsible for a poster concerning the ongoing work of producing a distributed ground heat flow model for Norway – “CryoGRID”.

Kjersti Gisnås (Master student, UiO) presented regional scale mapping of permafrost distribution in Norway using the so-called TTOP model, from which she was given the Permafrost Young Researchers Network (PYRN) national award. Finally, Isabelle Gärtner-Roer (University of Bonn, Germany) presented the project cooperation of SPCC and CRYOLINK. All mentioned presentations were a cooperation between the main author and other individuals and institutions. 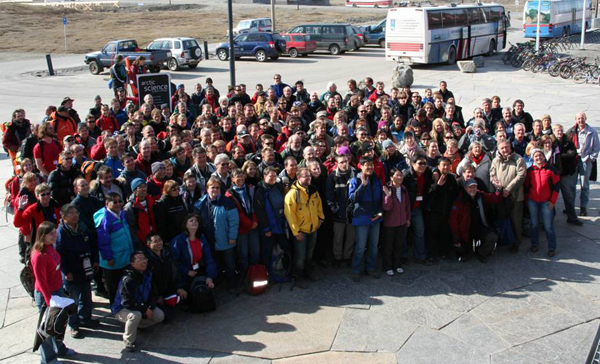 Group photo of most of the close to 250 participants of the Third European Conference on Permafrost in Longyearbyen, Svalbard. The conference had participants from 27 nations.

By Herman Farbrot
E-mail this page