UiO The Faculty of Mathematics and Natural Sciences Department of Geosciences
Main navigation
Back to uio.no
Sub navigation Menu
Research > Research projects from A to Z > MAGPIE
Norwegian version of this page

The MAGPIE research project is an international and interdisciplinary research collaboration to investigate glacial isostatic adjustment (GIA) processes in Greenland. Our goal is to improve estimates for current and past melting of the Greenland Ice Sheet. 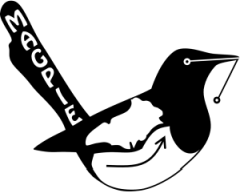 Melting of the Greenland Ice Sheet has accelerated during the past decade due to climate warming. This melting is now considered a major contributor to global sea level rise, and a serious threat to future coastlines. Thus, it is vital that we accurately monitor the patterns and volumes of melting. Currently ice loss is monitored by measuring gravity and ground height, which change as the ice melts. However, movements of the solid Earth beneath the ice also affect these measurements. Beneath Greenland, the solid Earth is moving as the weight of the melting ice is lifted off, in a process called glacial isostatic adjustment (GIA).

The deformation caused by GIA processes can be very slow, so the Earth is still responding to melting that happened when the ice ages ended several thousand years ago.

The rate of GIA depends critically on how easily mantle rocks flow – their viscosity. Viscosity is poorly constrained beneath Greenland and is likely to be complex. This uncertainty in viscosity leads to uncertainties in ice loss measurements.

MAGPIE seeks to improve estimates for loss of ice from the Greenland Ice Sheet to sea, by:

With this project we seek to develop new constraints on rock viscosity beneath Greenland by collecting geophysical data on the ice sheet. The magnetotelluric (MT) data image the Earth's electrical conductivity, which is sensitive to the temperature and water content of mantle rocks. Because these factors also control mantle viscosity, we can use MT data to map viscosity variations beneath Greenland. These data are also sensitive to subglacial melt, which will enable us to detect extra heat added beneath Greenland by the Iceland Plume.

We will develop a new numerical modelling technique for GIA that can accommodate large viscosity variations. The code will be useful to study GIA problems worldwide, but we will use it to predict GIA uplift patterns associated with the viscosity variations beneath Greenland. We will then use these much-improved GIA models to produce more accurate estimates for modern-day ice loss in Greenland.

The Norwegian Research Council finances this project through the FRINATEK program, project number 288449.  The MAGPIE project runs from 2019 to 2023.

The project is a collaboration between researchers from different institutes: