UiO The Faculty of Mathematics and Natural Sciences Department of Geosciences
Main navigation
Back to uio.no
Sub navigation Menu
Research > Research projects from A to Z > Trias North

The sedimentary rocks in the Barents Sea from the Triassic Period (250-200 mil years ago) may contain petroleum reservoirs, but our knowledge of the geological history of this area is limited. Along the Norwegian coastline some areas have been explored, while others have not. Trias North is a knowledge-building project aiming to investigate the geological development of rocks in and around the Barents Sea.

The Barents Sea is a part of the Arctic Ocean in the Hight North. Illustration photo: Colourbox.no, NASA

The geological history of the rocks in the Barents Sea remains enigmatic in several aspects. While increased knowledge has been gained in some areas along the Norwegian coastline, which have been investigated in connection with oil exploration, other areas are closed to exploration and remain poorly understood.

Trias North is a knowledge-building project aiming at gaining deeper insight into important geological questions like: How did sediments end up here? What controlled where they were deposited and which processes affected them after deposition? At what rates did the sediments accumulate and where did they come from? What environments developed, and where are the old sandy beaches? 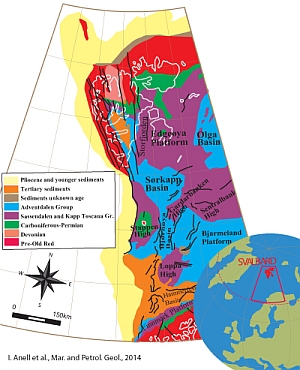 The reservoir properties of sandstones from the Triassic are well known further west around Longyearbyen, where studies of CO2 capture and storage have been carried out. However,  a thorough study and description of the sandstone layers on land east o, for example, Edgeøya is needed to get a fuller understanding of the geology of the area.

Our project aims to analyze the sedimentological, stratigraphical and structural setting of the region and perform detailed studies of the sedimentary systems to establish better temporal links between source areas, sediment routing, sedimentary sinks, and what happened with the sediments after deposition. We also want to undertake tectonic analysis to better understand large-scale driving forces of sag/warp basins and highs versus fault system development. Increased knowledge about the geological history of the area is not only of academic interest but also important in evaluating possible oil and gas exploration in the northern and eastern areas of the region.

Trias North will explore the Triassic basin development and sedimentary infill of the northern Barents Shelf by integrating geological studies onshore Svalbard with offshore seismic data analysis and numerical and analogue modelling. The scientific objectives are to:

A general objective for the project is knowledge-transferring and competence building.  This is achieved by recruiting PhD students and postdoctoral fellows (comprising the equivalent of 20 research years). Junior scientists will represent a fundamental part of the research team.

The Trias North – Reconstructing the Triassic northern Barents shelf project includes researchers from a variety of universities and research institutes in Norway and abroad.

The University of Oslo (UiO) is hosting the project, which is led by professor Alvar Braathen at the Department of Geosciences. Other scientists on the UiO team are Ingrid Anell, Roy Gabrielsen, Jan Inge Faleide, Ivar Midtkandal, Helge Hellevang, Johan Petter Nystuen, Per Aagaard and Knut Bjørlykke.

Other research partners are:

The Trias North project started up in 2014 and will end 2018. The project is financed by the Research Council of Norway and the following industrial partners: