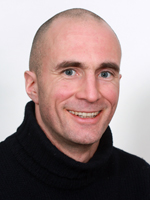 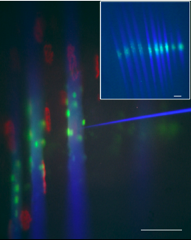 I work on the cytoarchitecture of skeletal muscle cells in normal as well as hyper- and atrophic conditions. Muscle cells are huge on a cellular scale, more than 10 000 times the volume of a large mononucleated cell. Because of their size, muscle cells meet several challenges regarding the production and delivery of proteins and nucleic acids to the different parts of the cytosol. Presumably for this reason, muscle cells are multinucleated, and contain thousands of nuclei orderly distributed along the fiber length.
By using an in vivo approach to labeling nuclei, we are investigating the number and distribution of myonuclei under varying conditions and at different stages of an animal's life. A dye is injected into the muscle cell (See figure) and the injected cells can be identified after several weeks (inset). Specially engineered software is used to analyze the distribution and cytosolic domain sizes for each nucleus, and how these parameters are changed under various conditions, like denervation, training and ageing.

J.C. Bruusgaard and K. Gundersen
Muscle atrophy is not accompanied by loss of myonuclei
Journal of Clinical Investigation, Apr;118(4):1450-7, 2008