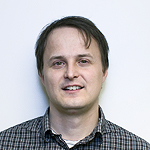 Lecturer at the Research Group for Robotics and Intelligent Systems

Leader for the Robotic and Intelligent systems study program

Master degree in measurement and instrumentation, Dept. of Physics, UiO 2000. I started working as a hardware and software developer in Mikrokrets followed by a brief stay in Kongsberg Devotek, later I took PPU and became teacher in Physics, Science and Mathematics, working at Oslo Private Gymnasium and Lørenskog Upper Secondary School. I started working at the Department of informatics in 2008 and have worked there as Head Engineer and later Senior Engineer. From 2018 i switched position to Lecturer at the Department of Informatics.

At the Department of Informatics I have worked with developing hardware and software, 3D-design and -printing, teaching and developing the lab part of INF5460 (measuring capacitive and magnetically induced noise in different cable setups using selected frequencies), purchases and software and lab maintenance for ROBIN. In 2010 I became safety delegate for labs at the Department of Informatics. Since then I have been Deputy and later Senior Safety Delegate at the Faculty of Mathematics and Natural Sciences, until I became Deputy Senior Safety for the University of Oslo 2014-2018. As a safety delegate I have been involved with the work environment committees at the Department, Faculty and the University, and participated in various Groups in UIO biggest ongoing building project, the New Life-science building.