Between 16. and 18. of August, DEEP organized an excursion in Rogaland. The objective of the excursion was to discuss Meso- to Early Neoproterozoic (Sveconorwegian) evolution of the pre-Caledonian basement exposed in SW Norway. 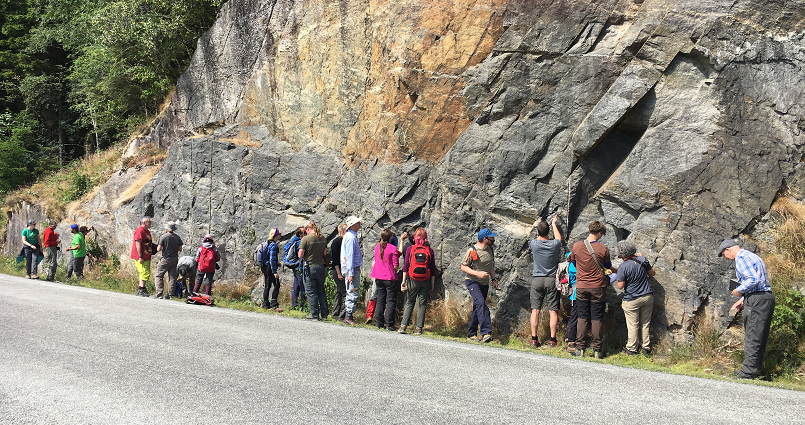 The excursion was led by Dr. Trond Slagstad from NGU and the participants discussed metamorphic and magmatic evolution of the hot lower-crustal section exposed in the visited region. The excursion was introduced by a talk of Dr. Slagstad, in which he presented the overall features of the visited part of the Sveconorwegian orogen and discussed with the participants some possible tectonic models for evolution of the area. Visited localities comprised exposures of magmatic (ultra)high-temperature metamorphic rocks. The participants received a thorough introduction in the evolution of the Sveconorwegian continental crust in southern part of Norway.

Among the best known rocks in Rogaland is the so-called Rogaland anorthosite, which is one of the youngest so-called "massif-type" anorthosites in the world and characteristic of the southwestern part of the ca. 1100-900 million years old Sveconorwegian orogen. The anorthosite is surrounded by ultra-high temperature (UHT) rocks, i.e. rocks that have been metamorphosed at temperatures up to 1000 ° C. The prevailing interpretation has long been that the UHT metamorphism was due to the heat released from the anorthosite when it intruded, i.e. a contact metamorphism. On the excursion we first looked at granites that were 15-20 km from the anorthosite, before we worked our way into the UHT rocks and then into the anorthosite itself. On the way, we crossed a recently discovered extensional shear zone, i.e. a zone of motion where the UHT rocks and the anorthosite, which originally lay deep in the earth's crust, moved upwards with respect to the granites that lay at shallower depths. This means that the distribution of UHT rocks is probably not related to intrusion of the anorthosite, but rather is due to movements (exhumation) along this shear zone. Once inside the anorthosite, we looked at the so-called high-aluminum orthopyroxene megacrysts (HAOMs). Dating of zircon from such HAOMs gives an age of 930 million years and the anorthosites have therefore been interpreted to be late-orogenic. This picture became a little more complicated a few years ago, when the age of the HAOMs turned out to be more than 100 million years older than the zircons. We discussed why this and other observations probably mean that the anorthosite was not formed rapidly and late in the Sveconorwegian orogenesis, but rather was formed over a period of over 100 million years, simultaneously with UHT metamorphism and granitic magmatism, and that it "looks" late because it was exhumed later.