UiO The Faculty of Mathematics and Natural Sciences The Centre for Earth Evolution and Dynamics
Main navigation
Back to uio.no
Sub navigation Menu
Research > Research topics > Dynamic Earth
Norwegian version of this page

The Solid Earth’s upper layer, the lithosphere, is thin and in constant motion. The dynamics of the deep mantle can modify the lithosphere and also influence the climate and the life on Earth. The history of Earth’s surface can be revealed by studying the Wilson cycles: the complete succession of events from breaking continents, to the formation and destruction of oceans and to supercontinent assembly.  It is believed that up to four different super continents assembled and collapsed before the youngest super continent, Pangea. The main hypothesis to be tested within CEED activities is that motion of tectonic plates on Earth is closely related to mantle dynamics and that the mantle-lithospheric dynamics drives major changes in Earth’s life. Volcanic events, the distribution of land and sea, and the motion of the whole Earth relative to its spin axis will be explored to find out how they influenced the climate through time. 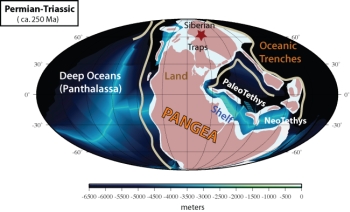 Global distribution of land masses, shelf area, shallow water and deep oceanic basins at the Permian-Triassic boundary time  (ca. 250 million years ago).  The geographical position of land masses in the geological past is given by paleomagnetic signature preserved in rocks. The age and geometry of oceanic basins can be also deduced from magnetic data if the oceanic crust is still preserved, otherwise is inferred from other geological and geophysical information. The extent of shelf area and shallow water  is reconstructed from paleontological data. Illustration: CEED.(larger image)

Plate motions continuously reshape the surface of the Earth: mountains rise where plates converge and rifts open up where they move apart. Plate tectonic theory attempts to describe this dynamic evolution of the outer shell of the Earth in terms of lithospheric plates. These plates are the interface between the mantle and the Earth’s outer layers (the oceans and atmosphere); they record mantle-lithosphere interactions through time, including massive LIP volcanic events. Conversely, movement of the plates affect the evolution of oceans, biodiversity and long-term climate.

It was not until Wilson’s classic paper Did the Atlantic close and then re-open? (Nature 211, 676 – 681, 1966) that plate tectonic processes were understood to have been operating before Pangea. Wilson’s succession of rifting, crustal subsidence and ocean opening, subduction initiation and ocean closure, and finally continent-continent collision was termed the ‘Wilson Cycle’ by CEED collaborator K. Burke. The ‘Wilson Cycle’ concept also spurred an intensive search for older supercontinents — As many as five supercontinents have now been proposed and there may be a periodicity of ~500 Myr for their formation.

The Centre for Earth Evolution and Dynamics – CEED, will explore aspects of Earth’s lithosphere dynamics through the 'Wilson Cycles' with a focus on:

Results from these studies will be used in themes 1 and 3 – DEEP EARTH, and EARTH CRISIS including collaborative ventures (e.g. global climate modelling) with international collaborators. 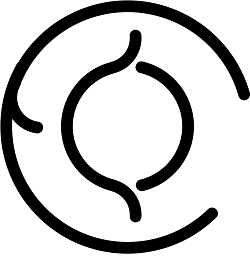