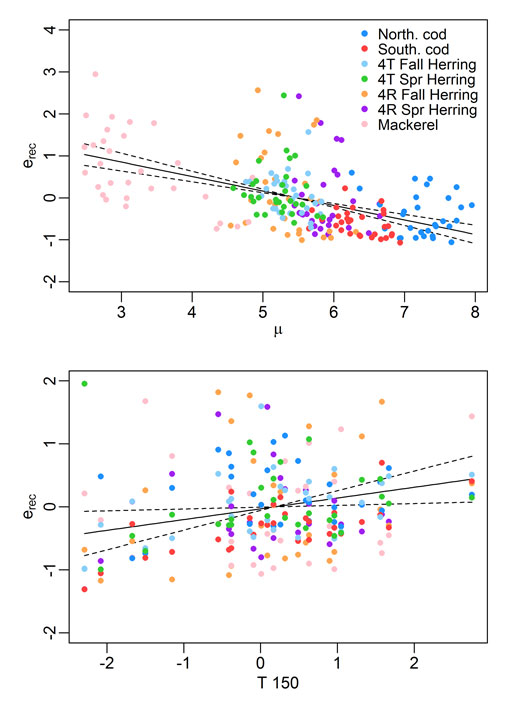 Figure 1. Effect of change in generation time (µ in years) and water temperature anomaly at 150 m (T 150 in °C) on the population growth elasticity to recruitment (erec). The 7 stocks are presented in different colours. We found that there was a general tendency of an increase of the population growth dependency on recruitment with decrease of the generation time (e.g. due to fishing) and increase of temperature (e.g., due to climate warming).

Mechanisms affecting productivity and hence biomass of marine fish populations are still widely unknown. In a recent paper (Brosset et al. 2019), we assessed the contribution of recruitment to population growth and identify the main drivers of elasticity of population growth to recruitment variability in the Gulf of St Lawrence ecosystem. For this, we analysed the population dynamics of 7 stocks (4 herring, 2 cod and 1 mackerel stock) in the Gulf of St Lawrence. While these stocks share the same environment, they represent different trophic levels (top predators, forage fish) and habitats (demersal, pelagic) as well as different historical exploitation.

The fish population is affected by the variation of many factors that are production of young (recruitment), fishing mortality, natural mortality (predation), and age at maturation… These effects are conveniently integrated by the properties of the population's transition matrix (e.g., Leslie matrix) and affect the population growth. Similar to what we did earlier (see post) we estimate the importance of recruitment on population growth and determine how this is affected by key parameters such as age structure, longevity, fishing mortality, environmental conditions and natural mortality (potential predators).

Using age-structured population matrices and Generalized Additive Model analysis, we found that population growth was most sensitive to recruitment variability with decreasing fish generation time, increasing water temperature and, in some cases, with predation. The dependence of population growth on recruitment, however, was generally close to 0, albeit higher for pelagic stocks than for demersal ones. This indicates that adult survival was more important than recruitment in shaping population growth and thus population size.

Why does it matter?