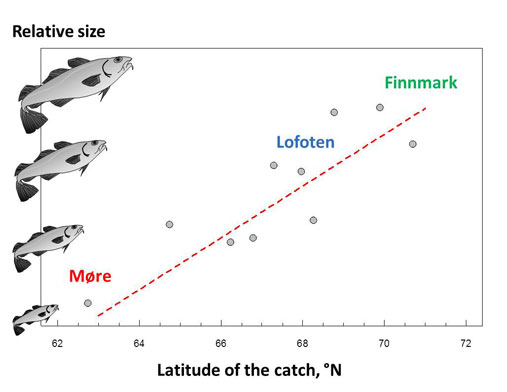 Figure 1. indicates the relative size of catch from different spawning grounds along the Norwegian coast. Møre is situated several hundred km farther away from the Barents Sea compared to Lofoten and Finnmark.

Human activities affect biological systems in multiple fashions. Two large factors known to impact marine organisms are climate warming and harvesting. The mature individuals of the stock of Northeast Arctic (NEA) cod migrates annually from the Barents Sea to spawning grounds along the Norwegian coast. The main spawning grounds are found in the Lofoten area (North Norway), but spawning is also taking place even more north in Troms and Finnmark and as far south as the coast off Møre. Historically, the changes in spawning location has been associated with two hypotheses climate warming and size reduction in the stock due to harvesting. Analysis of different sources of historical data have been giving different support for these hypotheses. In a recent work, we reevaluated these two hypotheses with modern data. During the last decade, the context has changes as the ecosystem of today experience historically high temperatures and the size and structure of the cod stock is recovering.

We have reevaluate these hypotheses. We posit that if the size of spawners are a main driver in shaping the spawning ground distribution of NEA cod then we should observe an increasing spawner size with migration distance to the spawning ground. We tested this prediction by combining two sources of modern data: economic data from the Norwegian fisheries and genetically determined individual fish sampled at the spawning grounds. The results shown in Figure 1 indicate an opposite trend with decreasing cod size with increasing distance from the Barents Sea. However, we needed to insure that the trend observed was not due to the presence in the fishery data of the non-migratory coastal cod; a smaller fish spending their whole life on the coast of Norway. To do this we used genetic information from another and smaller data set. This genetic analysis gave support for the same trend.

Our analysis on both fishery genomic data did not give support for size as being the main factor in shaping the spawning distribution in the new ecosystem state. Some further analysis of the economic data indicated a correlation with ocean temperature and mean latitude of cod catch as reported. Based on these results, it seems that temperature is an important factor in determining the spawning of NEA cod in recent years.