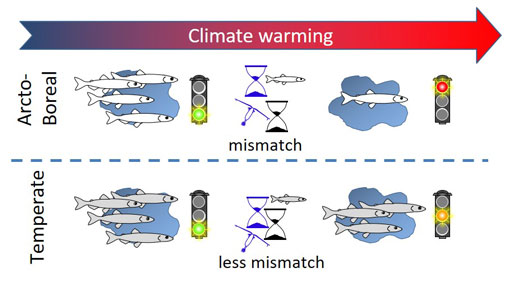 Figure 1. Using model projection we show that, due to temperature warming, the small marine fish populations in the Polar region, such as the Barents Sea, may collapse due to an asynchrony, a mismatch, with their prey while it will not be the case in the temperate region, such as the Bay of Biscay.

In marine biology and fish biology in particular a lot of attention is put on how the fish populations are renewing themselves (see post). Since the start of the 20th century, a lot of research effort have been put on understanding the importance of reproduction for fish populations and how the young fish are becoming big enough to be harvested: recruited to fisheries.

Among all the different hypotheses developed to help understanding the population change, the match-mismatch hypothesis is explaining the survival of the young fish by the synchrony with the seasonal productivity of its prey. This hypothesis was developed in the 1960s by the English fisheries biologist David Cushing (see post). Cushing demonstrated that for small marine fish living in seasonal environments, where the prey have peak of production, an asynchrony with this peak leads to a lack of food for the fish and an unsuccessful reproduction and recruitment.

Knowing that the temperature is affecting the timing of reproduction in many organisms, we have explored how climate warming would affect the recruitment of fish that have their reproduction tightly linked to their prey by a match-mismatch relationship. We have focussed our study on small marine fish that are both an important harvested resource and a crucial link between the plankton they feed on and their own predators.

We have developed a model simulating how fish abundance changes for an high latitude (Polar fish) fish population, in the Barents Sea, and for a temperate fish population, in the Bay of Biscay, both feeding on zooplankton (recently reported in Durant et al. 2019). The IPCC is reporting the possible temperature increase for the next 100 years (or climate-warming projections). Using one of these temperature projections, we have developed a mathematical model to project the change of the fish population abundance over the next 50 years.

Of course, this is not a prediction, meaning that many other factors may prevent this fatal outcome: change of prey, migration, change of spawning period… As it should be, nothing is more difficult to make predictions on than the future. However, our models tell us that the high latitude species seem less robust to changes in seasonality due to climate change than temperate species. The change in the timing of the zooplankton peak due to climate warming is more likely to cause a collapse of high latitude fish… apart if they adapt to new conditions.