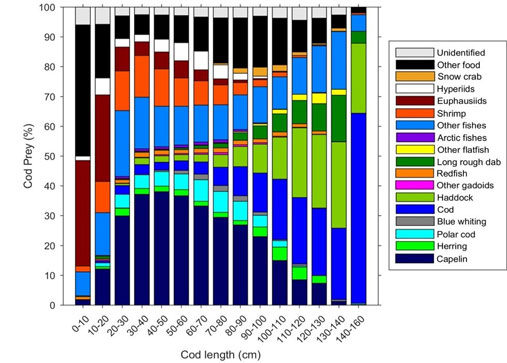 Figure 1. Diet of Atlantic cod of different size (cm) presented as percentage of total prey weight per species/species group. Data are coming from 33-year time-series of stomach-content data from 1984 to 2016.

Understanding the interaction between species is particularly important in marine systems where an ecosystem approach of management is desirable, such as in the Barents Sea (see post). One of the most studied species in the Barents Sea due to its economic importance (provisory reported catch of 868 276 tonnes for 2017: ICES 2018) and iconic status is the Northeast Arctic cod (Gadus morhua). In addition to being the main target of fisheries in the Barents Sea, cod is also a prominent predator in the Barents Sea food web. To understand how the biological components of the ecosystem are connected and thus be able to manage the exploitation of the Barents Sea, detailed information on the predation dynamics of cod are needed. Stomach-content data can provide comprehensive information on the diet of a species at a particular point in time and space. When conducted over long temporal scales and across size classes, high-resolution stomach-content data can provide information that are key to understanding trophic interactions in marine ecosystems.

Since 1984, PINRO (Knipovich Polar Research Institute of Marine Fisheries and Oceanography in Murmansk) and IMR (Institute for Marine Research in Bergen) are collaborating to obtain data in the Barents Sea. One such collaboration is the collection of cod stomachs and analysis of their content. Over the years an impressive 380 948 stomachs were sampled across the Barents Sea for an average of 10 884  stomachs each year. These data are assembled in the Norwegian-Russian stomach-content database and are available for nearly all months each year.

Holt et al. (2019) used these data to explore the changes of the cod diet in the Barents Sea, in particular long-term interannual trends, differences between seasons, cod-prey size relationships and during development shifts in cod diet composition.

They found that cod start to eat fish (as an alternative to exclusively eating plankton) as early as 20 cm in length corresponding to a fish of 1 year of age. This tendency towards fish diet is established earlier in life than for comparable cod populations. Cannibalism, that is well documented for this species (Bogstad et al. 1994; Dolgov et al. 1994; Uzars & Plikshs 2000; Neuenfeldt & Köster 2000; Yaragina et al. 2009; Pálsson & Björnsson 2011), was found already for cod of 20 cm, the intensity of it increasing with the size of the cod. Holt et al. found also that the cod eat all size of prey up to a limit of 33% of their own length. This means that the bigger/older the cod become the broader prey size spectrum they can forage on making them extremely efficient generalist predators.

Cod diet varied significantly during 1984–2016, consistent with changes in prey, cod abundance and distribution. Seasonal differences were also observed with capelin (Mallotus villosus) dominating the winter diet, whereas cod, polar cod (Boreogadus saida), and other fish species were more prevalent in summer/autumn months. This confirms the opportunistic predatory behaviour of this species.

Why are these findings important?

The Barents Sea cod is considered the most important predator in the Barents Sea. With this study, we provide evidence for disproportionate predator–prey size distributions as well as shifts in diet composition with cod development. Cod abundance has increased in the Barents Sea, reaching unprecedentedly high levels in recent years. As such, the relationship between cod diet and the abundance of cod may have increased impact on important prey populations, particularly pelagic fish stocks that encompass a high proportion of their diet (Norwegian spring spawning herring Clupea harengus, capelin…) and the other species that depend on them (see post). This will likely have consequences for the Barents Sea food-web structure and ecosystem function. This work represents an important step towards understanding trophic linkages that determine Barents Sea ecosystem dynamics.

Dolgov, A.V., Korzhev, V.L., Tretyak, V.L. 1994. Cannibalism and its importance for formation of recruitment of Arcto-Norwegian cod in the Barents Sea. Proceedings of the sixth IMR-  PINRO Symposium, Bergen, 14-17 June: 121-128.