The Kristine Bonnevie lectures 2015: How should we value nature in a human-dominated world?

Georgina Mace: "How should we value nature in a human-dominated world?". James Wilsdon: "The science and art of scientific advice" 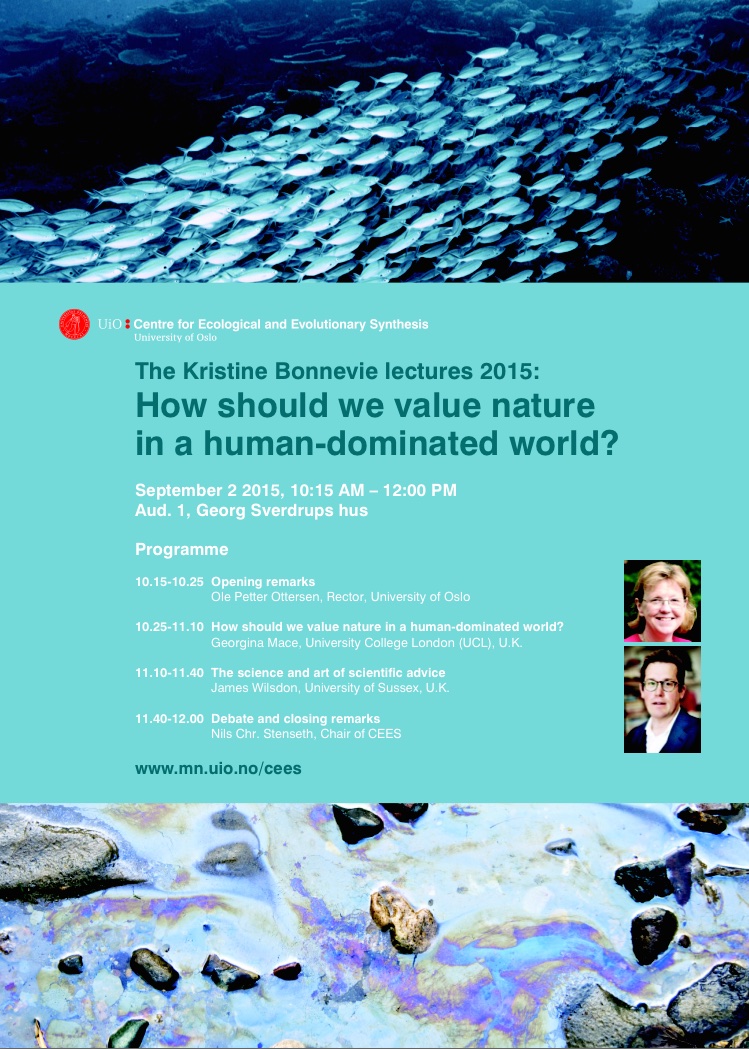 Georgina Mace: "How should we value nature in a human-dominated world?"

10.25-11.10: How should we value nature in a human-dominated world?
Georgina Mace, University College London (UCL), U.K.

Lecture title: How should we value nature in a human-dominated world?

Abstract: Nature conservation has traditionally focussed on preservation and protection. But this approach is increasingly challenged as the impact of human activities on land and in the sea continues to spread and intensify. At the same time, people depend on nature for material goods and services, as well as for health, recreation and inspiration. In this lecture I will show how the focus of conservation has shifted from preserving biodiversity components (primarily species & habitats) and their spatial patterns, to maintaining form and function, adaptability and resilience for the future. This requires new tools and techniques for measuring, valuing and conserving nature. I will outline some new ideas and highlight some significant science gaps and research priorities.

Georgina Mace is Professor of Biodiversity and Ecosystems and Director of the UCL Centre for Biodiversity and Environment Research (CBER). She joined UCL in 2012 from Imperial College where she was Director of the NERC Centre for Population Biology. Her research interests are in measuring the trends and consequences of biodiversity loss and ecosystem change. She led the development of criteria for listing species on IUCN’s Red List of threatened species, and was a coordinating lead author for biodiversity in the Millennium Ecosystem Assessment. Recently she has worked on the UK National Ecosystem Assessment, was a co-investigator on the NERC Valuing Nature Network, and Associate Director of the Ecosystem Services for Poverty Alleviation Programme, funded by DfID, NERC and ESRC. She was elected FRS in 2002, and was the 2007 winner of the international Cosmos prize. She was President of the Society for Conservation Biology from 2007-2009, and President of the British Ecological Society from 2011-2013. Currently she is a NERC Council member, member of the Council of the Royal Society, and Chair of the science committee for the DIVERSITAS global change research programme. Source.

Professor of Science & Democracy at University of Sussex, U.K., and director of The Nexus Network.

Lecture title: The science and art of scientific advice.

Abstract: Across Europe, scientific advice has never been in greater demand; nor it has been more contested. From climate change to cyber-security, poverty to pandemics, food technologies to fracking, the questions being asked of scientists, social scientists and other experts continue to multiply. At the same time, the authority and legitimacy of these experts is increasingly under scrutiny.

James Wilsdon will describe how cultures of scientific advice have changed over the past twenty years, to become more open, accountable and multidisciplinary. He will survey the international landscape, looking in particular at recent controversies over EU scientific advice, the announcement of a new European Commission advisory mechanism, and the outcomes of an inaugural global summit of scientific advisers in August 2014. And he will ask whether the current enthusiasm for scientific advice and evidence-informed policy is part of a broader shift towards more ‘experimental’ forms of government, and consider what this means for the relationship between experts, publics and democracy.

James Wilsdon is professor of science and democracy in SPRU (Science Policy Research Unit) at the University of Sussex, and director of The Nexus Network, an ESRC-funded initiative to join up research, policy & practice across food, energy, water and the environment. In 2013, he became chair of the UK’s Campaign for Social Science, which works to make the case for social science with policymakers, the media and the wider public. Over the past year, he also chaired an independent review for the UK government of the role of metrics and indicators in research assessment, which recently published its final report ‘The Metric Tide’. In 2015, he was elected a Fellow of the Academy of Social Sciences.

His research interests include the role of evidence & expertise in policymaking; interdisciplinarity, particularly between natural and social sciences; science and innovation policy in the UK, EU and China; and public engagement in research. From 2008 to 2011, he was founding director of the Science Policy Centre at the Royal Society, the UK’s national academy of sciences. Prior to that, he spent several years as head of science and innovation at the public policy think tank Demos.

He has written for Nature, Science and the Financial Times, and is an editor of the Guardian's 'Political Science' blog on science and innovation policy. You can often find him on twitter @jameswilsdon.

The Kristine Bonnevie lectures on evolutionary biology is part of the University’s annual celebration.