Open for all! Speakers: Corina E. Tarnita from Princeton University and Jan M. Nordbotten from Department of Mathematics, University of Bergen. This event is part of the University’s annual celebration. 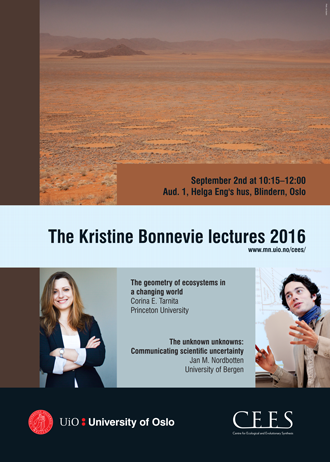 Corina E. Tarnita was in 2016 named a Kavli Frontiers of Science Fellow of the National Academy of Sciences. Her work is centered around the emergence of complex behavior out of simple interactions.

Jan Martin Nordbotten was the youngest ever to complete a PhD in Norway, and the third-youngest professor. As a frequent writer of popular science articles, he also recorded the science segments for the Norwegian TV show "Norges Smarteste" in 2015.

No registration, but you can let us know on Facebook that you are going!

10.25-11.10: The geometry of ecosystems in a changing world
Corina E. Tarnita, Princeton University

Assistant Professor at the Department of Ecology and Evolutionary Biology, Princeton University.

Lecture title: The geometry of ecosystems in a changing world

Abstract: Most people (biologists included) tend to perceive nature as messy and disordered, in contrast to the regularity of anthropogenic “built” environments. However, the advent of Google Earth has revealed that highly regular, large-scale, self-organized spatial patterns are astonishingly common in terrestrial and aquatic ecosystems worldwide. In this lecture I will show how most of these patterns arise from small-scale facilitative and/or competitive dynamics within and among “foundation species,” such as corals, mussels, plants, and mound-building social insects. I will also show that these patterns can have broad ecological implications, such as enhancing ecosystem robustness to climatic extremes and other perturbations.

Corina joined the Princeton faculty in February 2013. In 2016 she was named a Kavli Frontiers of Science Fellow of the National Academy of Sciences. In 2015 she was named an Alfred P. Sloan Research Fellow. Previously she was a Junior Fellow at the Harvard Society of Fellows (2010-2012) and a postdoctoral researcher with the Program for Evolutionary Dynamics, Harvard University (2009-2010). She obtained her B.A.('06), M.A.('08) and PhD ('09) in Mathematics from Harvard University. Her work is centered around the emergence of complex behavior out of simple interactions and her research interests range from the transition from single cells to multicellular organisms to the role of cooperation as a building block of evolutionary construction and to the effects of spatial structure and pattern on the stability and persistence of populations and ecosystems. Homepage.

Professor at the Department of Mathematics, University of Bergen, Norway.

Abstract: Science is by definition the art of converting the unknown into the known. During that very process, scientists faced with complex real-world problems inherently have to communicate partial knowledge, both within the scientific community and to society at large. Persistent challenges relate to communicating low-probability events, accepting the influence of unquantifiable sources of error, and understanding methodological limitations. In this talk, we review these challenges, using examples from geophysics, climate science, and biology.

Jan Martin Nordbotten was the youngest ever to complete a PhD in Norway, and the third-youngest professor. He currently leads the porous media research group in the Department of Mathematics at the University of Bergen, and holds a visiting appointment at the Department of Civil and Environmental Engineering at Princeton University. Nordbotten is a recipient of both national and international awards for his research, and is a former VISTA professor of the Norwegian Academy of Sciences and Letters. As a frequent writer of popular science articles, he also recorded the science segments for the Norwegian TV show "Norges Smarteste" in 2015. Homepage.