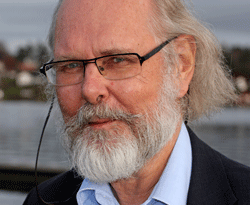 I am a curiosity-driven scientist combining theoretical and empirical approaches to study ecological and evolutionary processes. My motivation has always been to find out how nature works – be it the mystery of lemming cycles or macroevolutionary dynamics through deep time. Until the early 1990s, much of my work was purely theoretical in the form of mathematical modelling. Later, I have adopted the research strategy of ‘asking’ available data what the underlying ecological or evolutionary process most likely is – all within a theoretically-informed statistical perspective.

I am convinced that I have made – and continue to make – a strong and long-lasting contribution to science by breaking down interdisciplinary barriers, supporting and mentoring promising young scientists, increasing our basic knowledge of nature and opening new avenues of research into the interactions between organisms in changing environments.

My motto is “Biology is one discipline”, and I continuously strive towards unifying the many subdiciplines of biology. Above all I work on merging ecological and evolutionary thinking as well as better understanding the feedback-loop between ecology and evolution: Ecology causes evolution through ecologically-based selective pressures, and when evolution occurs, the ecological interactions within ecosystems may change – potentially leading to modified ecologically-based selective pressures.

Being a scientist is not just about knowledge and discoveries, however, but also about standing up for the importance of solid science and discussing its wide-ranging societal implications – something I pursue in a broad spectrum of media, both nationally and internationally.

Current major research topics of mine include

I am currently having the following two main positions:

A selection of my...

See also "Complete publication list", "Publication databases" and “Publications” further down with links to an updated list of my publications as well as citations-reports.

Building teams and a Centre of Excellence

I love interacting with colleagues, and find great pleasure in building and maintaining teams. This led me to spend much of the past two decades developing the Centre for Ecological and Evolutionary Synthesis (CEES) at UiO, which was awarded status as Centre of Excellence by the Research Council of Norway (2007–2017). I chaired CEES until 2018 – a job I enjoyed tremendously and look back at with great pleasure. (See "Norwegian evolutionary biologists pushed the frontiers in international science" in Titan.uio.no).

I have always done my best to support – and indeed help – younger colleagues. I find working with younger colleagues very stimulating and I learn a lot from them – not the least as they often have different points of views on a lot of issues. Over the years I have trained a large number of students at various levels (more than 50 PhDs and more than 70 post docs) – most of them on highly interdisciplinary topics, but with solid anchoring in their own chosen field. My students over the years have come from all over the world, and I have dedicated much effort to supporting excellence in science in Africa (see the comment "Build science in Africa" in Nature).

Over the years several of my previous students and post docs have developed their own strong careers.

Current and past positions include

Since 1980 I have been a Professor at the University of Oslo – first as Associate Professor, then from 1990 as full Professor: first of Zoology and Population dynamics, then (from 2004) of Ecology and Evolution. In addition, in the early 1980s I worked for a few years as Associate Professor of Population Dynamics at the University of Lund, Sweden, and I have had longer visiting stays in Brighton (UK), Laurence, Kansas (US) and Berkeley, California (US). Since September 2018 I have been a Professor at The Faculty of Mathematics and Natural Sciences at the University of Oslo in addition to being a strategic and scientific adviser to the Dean of Mathematics and Natural Sciences. Staring August 1, 2021 this position was reduced to a 50 percent position. In my capacity as adviser to the Dean, I am promoting the development of top-level research units within the Faculty: in this part of my work I focus on helping young talented people to further develop their career, including making them believe in themselves and in their ideas. I was a Professor II at the University of Agder until July 31, 2021, when I became an ordinary professor in 50 percent position: At the University of Agder I work with colleagues at the Centre for Coastal Research (CCR) as well as chairing the CCR Board – doing pretty much the same as in Oslo though focusing on marine biology.

I have done editorial work for several journals, including as an Editor for Proceedings of the Royal Society of London; Series B (UK; 2005–2008) and earlier as a Board Member (Associate Editor) of same journal from 1998–2003; Editor-/in-Chief of the environmental journal Climate Research (Germany; since 2005); and Editorial Board Member of Proceedings of the National Academy of Sciences (PNAS; since 2017).

Part of my scientific history

My research interests span a broad spectrum of ecological and evolutionary topics, most of which are rooted in population biology, including a career-long love-affair with small rodents and lemmings in particular. I strongly favour comparative studies – by comparing similar features between different (but comparable) systems, we typically learn more than we otherwise would have done. Variations in population densities in time and space – and the underlying demographic processes – have been a main interest of mine over the years. An important example is the interdependent relationship between density-dependent and density-independent processes, where the ecological effect of climate is an important example of the latter. I am convinced that it is helpful to try to understand what has happened in the past, in preparing for what might happen in the future, e.g., ecological and evolutionary effects of climate change. For this reason, I value the existence of long-term time series – and the analysis of them.

Although most of my work relates to basic issues, I find great pleasure in working on more applied issues as well. (I have never claimed that my research is of any immediate use, although it never embarrasses me if it turns out to be of practical use here and now). These applied interests have brought me into work on pest control (e.g., rodents in Africa), harvesting (marine and terrestrial), bio-economics (e.g., the ecological dynamics of dry-land pastoral systems) and epidemiology (Plague).

Awards, honors, fellowships and commissions of trust include

2021-2025. President of the International Society of Zoological Sciences; headquarters in Beijing, China

2021. Appointed a Science Ambassador of the Alliance of International Science Organizations-ANSO

2019. Advisor to the Eötvös Loránd Research Network of the Hungarian Academy of Sciences

2019. Foreign member of the Ethiopian Academy of Sciences

2019. Honorary member of the Hungarian Academy of Science

2019. Awarded the Chinese Academy of Science’s medal for International Scientific Cooperation for 2018

2018. Elected member of The World Academy of Sciences (TWAS)

2016. Foreign member of the Russian Academy of Sciences

2015. International member of the National Academy of Sciences, Washington, US

2014–2017. Member of the Scientific Council of the European Research Council (ERC)

2012. Awarded the Research Council of Norway's Excellence in Communication of Science Award

2011. Chevalier (Knight) in the French National Order of the Legion of Honour

2011. The University of Oslo’s Inspiration Award for Marine Biology, Norway

2010. Awarded the Bonnevie Prize for carrying out excellent work within the field of biology and to promote public understanding about biology through targeted and focused communication about the discipline

2009–2014. Elected Vice-president/President (alternating years) of the Norwegian Academy of Science and Letters, DNVA

2008. Member of the Executive Committee of the International Society of Zool. Sciences

2007. Elected fellow of the Swedish Royal Physiographic Society in Lund: an academy for natural science, medicine and engineering

2006. Named Einstein Professor of the Chinese Academy of Science

2006. Member of the Finnish Society of Sciences and Letters

2002. Member of the Royal Norwegian Society of Science and Letters

2000. Awarded the Research Council of Norway Award for Outstanding Research

1999–2003. President of the Forth European Mammal Congress

1996–1997. Elected fellow of the Centre for Advanced Study (and appointed as its Chair) for studying the “lemming problem”

1996. Awarded the University of Oslo Award for Outstanding Performance in Science (Class of Natural Sciences and Medicine) (the associated grant covers the years 1996–1999)

1986. Elected member of the Norwegian Academy of Science and Letters, DNVA

1984. Awarded the Nansen Medal for Outstanding Research for work on Evolutionary Biology