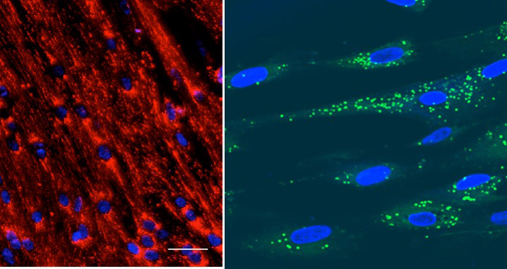 The main focus of the research group is to study skeletal muscle molecular mechanisms related to insulin resistance and type 2 diabetes mellitus (T2D). Skeletal muscle is of particular interest in metabolic diseases and disease prevention since it is the major regulated energy consumer in the human body.  We study how cellular mechanisms underlying insulin resistance in human skeletal muscle can be affected by pharmacological intervention with potential drugs that e.g. modulate lipid metabolism via metabolic nuclear receptors, by affecting thermogenic/futile processes and by exercise in vitro. In addition to skeletal muscle, cells from other organs of importance in T2D are included in some of the projects.

Obesity is a risk factor for development of many clinical complications - including insulin resistance and type 2 diabetes (T2D). For many individuals, physical activity is a good treatment strategy, although we do not completely understand the molecular mechanisms involved. In this project we study effects of an in vitro-exercise model (electrical pulse stimulation, EPS) on energy metabolism and myokine (exerkine) secretion in human myotubes from different donor groups, e.g. lean, well-trained and obese donors, as well as patients with T2D or with spinal cord injuries. Cross-talk between exercising muscle and other cell types are studied using conditioned media.

Metabolic nuclear receptors e.g. LXRs, PPARs and thyroid receptors (TRs) are important regulators of cholesterol, lipid and glucose metabolism as well as thermogenesis in the body, and are also involved in regulation of inflammation and development of atherosclerosis. This explains why metabolic nuclear receptors are potential hot drug targets in the battle against T2D and obesity.  More specifically, we currently address the metabolic role of regulation of PPARs through SUMO-specific protease 2 (SENP2) in both human myotubes and adipocytes.

Crosstalk between skeletal muscle and bone

The interplay between skeletal muscle and bone is of high interest, partly due to the close proximity of the organs, but also the fact that these organs are major regulators of whole-body energy metabolism. In addition to mechanical communication between bone and skeletal muscle, recent studies indicate an emerging role of biochemical communication (crosstalk). Factors released by skeletal muscle are called myokines. Moreover, studies have shown that dysregulation of one organ affects the other organ, for example, muscle atrophy (muscle wasting) results in osteoporosis. In this project we are studying the effect of exercise in vitro on modulation of energy metabolism in various bone-derived cells (e.g. osteoblasts), as well as the effect the protease legumain on skeletal muscle energy metabolism.

Thus, deeper understanding of crosstalk between skeletal muscle and bone has the potential of exploring new drug targets for therapies of sarcopenia and osteoporosis.

This project is a collaboration with ProTarg research group. See their home page for more information. 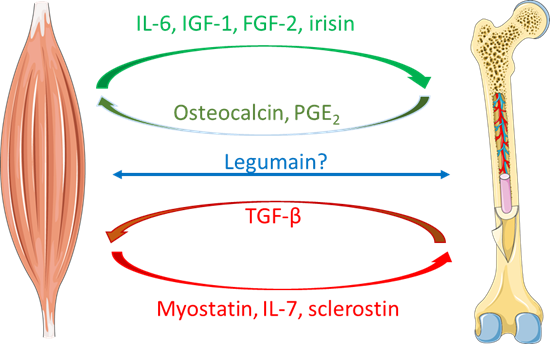 Possible biochemical crosstalk between skeletal muscle and bone. The figure shows myokines released from skeletal muscles that could affect bone, and effects from bone-derived factors on skeletal muscle. Inhibition is illustrated as red arrows while the green arrows illustrate stimulation. The blue arrow is unknown mechanism. The figure has been made by postdoc Ngoc Nguyen Lunde