Searching for the nature of Dark Matter combining Astro-, Astroparticle- and Particle Physics. 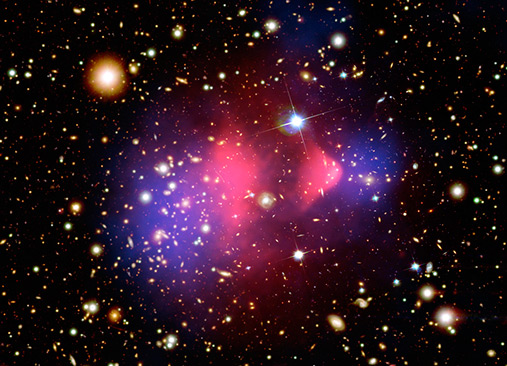 The identity of the cosmological dark matter is one of the most important open questions of fundamental science today.

Cosmological observations show that over 80% of the matter in the Universe is made of a component that is not directly visible, coined dark matter, that most likely consists of a so far unknown type of elementary particle. 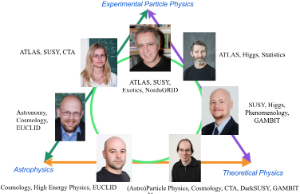 Uncovering the identity of this substance would be one of the truly revolutionary discoveries of our time.

Dark Matter is the main driving force in structure formation, a process leading to the creation of galaxies as our own, and is thus indirectly responsible for the origin of life. Dark matter is ubiquitous, a cup of tea or coffee is crossed by millions of DM particles every second.

After the discovery of the Higgs boson at the Large Hadron Collider (LHC) tackling the dark matter enigma is one of the top goals on astroparticle and particle physics roadmaps for the future.

The Dark matter group in Oslo aims to contribute to dark matter research by combining research in astro-, astroparticle- and particle physics. Our reseach will include dark matter searches with the following experiments EUCLID, CTA and ATLAS at LHC. SDI is one of 15 strategic research initiatives established by the Faculty of Mathematics and Natural Sciences. As such, we will initially have 5 PhD student and one postdoctor positions (see left column for typical thesis topics).