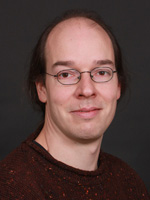 My main research so far has focussed on dark matter, both in phenomenological studies and in the context of concrete models like supersymmetry or large extra dimensions (see e.g. a review on dark matter searches with gamma rays). Further interests include cosmic rays, primordial density fluctuations and cosmological structure formation, as well as global fits of new physics (within the GAMBIT project).

I am also one of the main authors of DarkSUSY, a publicly available numerical packag

e to compute dark matter properties in various particle physics frameworks (we had a DarkSUSY day at UiO to mark the radically new version 6 that allows to study scenarios other than supersymmtry). Click on the logo to get the most recent release.

For more details, see the list of articles below. There are also some popular science descriptions of my work (e.g. 1,2,3,4); a few are only in Norwegian (1, 2, 3, 4). A recent idea that picked up some press coverage is pandemic dark matter, proposing that the production of dark matter might have striking similarities to the spread of diseases (see also forskning.no and Abels tårn).

Currently our team consists besides me of Jake Gordin  (PhD cand.), Eline Andersen (MSc cand.), Kristian Vangsnes (MSc cand.) and Erlend Rud (MSc cand.). Former members include  Anastasia Sokolenko (now at HEPHY), Francesca Calore (now at LAPTh,Annecy), Andrzej Hryczuk (now at NCBJ, Warsaw), Mitsuru Kakizaki (now in Toyama), and Martin Vollmann (now in Munich). Together with the high-energy group and ITA we used to run the bi-weekly journal club focussed on (astro)particle physics, and I organize the Theory seminars which often cover related topics. In 2016, I was one of the main organizers for the Dark Side of the Universe conference in Bergen, Norway. Recent long-term visitors included Mathias Garny, Jörn Kersten, Christoph Weniger, Pasquale Serpico and Michael Gustafsson.